CD REVIEW — Images of the organetto abound in illuminations, sculpture, and literature. It was by far one of the most popular instruments from the 13th century onward, though technological and musical developments eventually caused it to fall from favor. So too did the lesser-known hammered clavisimbalum, a kind of mechanized hammered dulcimer or psaltery that was a predecessor to the later clavichord and virginal. The Spanish ensemble Tasto Solo dedicated its first two albums, both highly celebrated, to 15th-century keyboard music well suited to these instruments: the first, a tour of Conrad Paumann and the German keyboard school, and second, intabulations of Binchois and Du Fay in the Buxheim Orgelbuch. 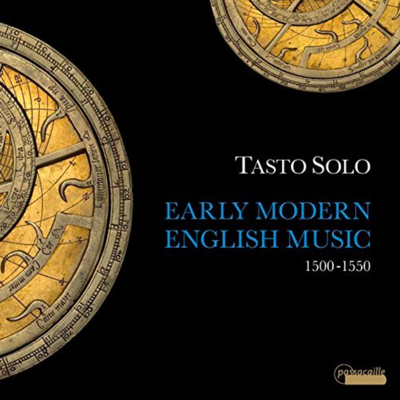 On this, its third and latest album, the group moves both across the pond to England and forward in time to the early 16th century, the period that saw the organetto and clavisimbalum fade into obscurity. One might wonder whether such instruments are appropriate, then, for the new musical trends developing in the early Tudor courts. But as director Guillermo Pérez explains, Henry VIII was both an avid music lover (and musician/composer himself) and enthusiastic antiquarian. He collected new music as well as compositions from centuries before, and his personal collection of instruments included a wide variety of keyboards. Moreover, in addition to the keyboardists Henry kept at court, he also hired two virtuoso players from Italy; this group would prove to be an inspiration to the much more well known English Virginal School a generation or two later. Given, then, the king’s dual loves for music and older things, Tasto Solo performs a kind of what-if experiment on this album, an imagination of what such an atypical, but not inconceivable, consort might have sounded like in Henry’s day.

Supplementing the older organetto and clavisimbalum with the then-popular Renaissance harp, the ensemble works its way through a variety of genres common to the period, namely courtly songs, instrumental consort music, and grounds. However, the players have had to make some adjustments to the music as it was notated in sources such as the Henry VIII Manuscript, since these earlier keyboard instruments do not always have the necessary range or technical abilities to tackle some of the later musical demands. Therefore, these selections are creative reworkings, explorations of how an early 16th-century musician might have adjusted the music to an older style of instrument.

The album is steeped in the history of these instruments, and of the music of this period, yet sounds at once fresh and exciting. Well-known pieces such as King Henry VIII’s Pavyn and Galliard, or My Lady Carey’s Dompe, are brought to new life by the variety of timbres achieved by the organetto alone or in combination with the other instruments. The clavisimbalum positively shimmers in its solo moments, and in it one can hear everything from the medieval psaltery to the much later Appalachian dulcimer. The ensemble plays with wonderful sensitivity, whether in the somewhat straightforward arrangements or in their charming improvisational approach to the grounds. One could easily imagine that if someone in Henry VIII’s court had played these instruments as well as Tasto Solo, they might not have disappeared so quickly.