My Stealth Campaign for Telemann 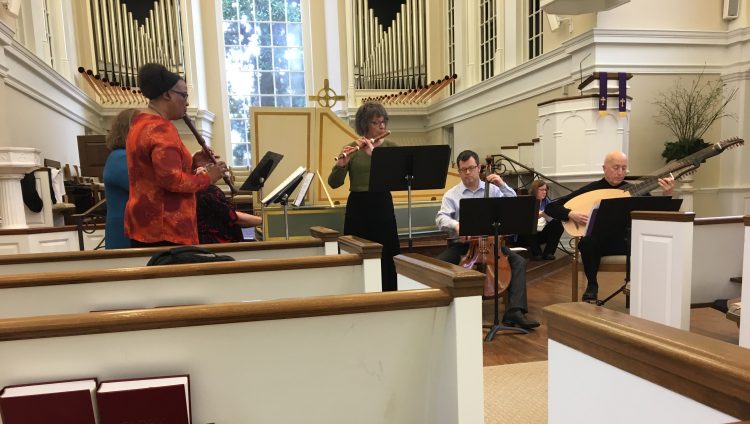 Sixth in our series of guest articles for Early Music Month

Reflections on My Debut with Music City Baroque

In cramped, rather dark college practice rooms in the basement beneath Clement Auditorium in verdant middle Tennessee, I came to love G.P. Telemann. Ruth, a violinist friend of mine, was obsessed with German Baroque music. I knew a few Bach keyboard works and some Handel flute sonatas. That was pretty much it.

Ruth loved playing fast. She could type 88 words per minute to my 72 and she played as fast as she typed. I was convinced her mind worked on some alternate plane from mine. But I stuck with it. She’d crack jokes as she played which I, as a flutist, had to suffer through, laughing on the inside, while I kept on playing, faster and faster. It was great experience for orchestral work and chamber music with strings.

Ruth found a book of Telemann duets, then another, then the prize—his canonic sonatinas. These fascinating explorations of canonic writing for each of the three-movement works opened doors of magic. I’d never really thought of form in music and particularly could not have imagined a canon beyond traditional Girl Scout rounds like “Make new friends, but keep the old; one is silver and the other gold.” Yet here were well-constructed works whose loveliness erased any consideration of form.

My lifelong advocacy of Telemann began in those practice rooms. I couldn’t understand why everyone didn’t extol him, elevate him, exalt him (I was young). But, to quote Robert Frost, “way leads on to way” and years later, I went directly from New England Conservatory to Stanford with Renaissance dance music as my new love. Juan del Encina, Ludwig Senfl, Tomas Luis de Victoria, Michael Praetorius, Anthony Holborne, and in the Baroque, the French baroque was so directly related to dance that I “took the other as just as fair.”

But when I discovered Telemann’s unaccompanied fantasias, our affair was rekindled. There was liberation in the myriad entrancing ideas easing gracefully from one to another. My Gemini spirit embraced the contrasts. Unlike Bach who, at that time, was so deified that he felt like a straightjacket, and Handel, whose bare slow movements I didn’t have enough period knowledge of embellishment to appreciate, Telemann felt . . . undervalued. So as my spiritual brother, I decided to program his music whenever I could. I was on a mission.

In a zero-sum world, the false equivalence that if Bach is great, Telemann must be lesser, held sway. Loving Bach as I do and so grateful for his flute sonatas and his one unaccompanied suite for flute, not to mention that glorious Passacaglia and Fugue in c minor, I still couldn’t drink the Koolaid even if made with pure brook water. Serendipitously, Bach himself provided the key to freedom’s gate. In one of his little-recognized poems, “Devout Thoughts of a Pipe Smoker (Erbauliche Gedanken eines Tobacksrauchers),” he wrote (my translation):

Oft, as I fill this pipe of mine
With good, fragrant tobacco shag
In pleasure just to pass the time,
I see, then, such a sad image
And this moral I then create
Of what will be my fate.

The pipe is made of earth and clay.
I, too, am surely made of these.
I, too, return to earth one day…

It was clear that he’d have been horrified by the deification. Along with his strong stance on musical standards, he was humble about his place in the universe. We are all headed for the same fate, no different from fragrant pipe smoke.

In open air, smoke dissipates;
Nothing but ashes doth remain.
Thus consuméd is mankind’s dignity
Bodies returned to dust will be.

I convinced a soprano friend to sing a cantata; I worked with a violinist, organist, and gamba player in Houston on a trio sonata, and I played the fantasias in any summer traverso workshop I attended. Everyone I introduced to my beloved, loved him as well: “Wow, I didn’t know he was that good,” they’d proclaim in wonder. I was a stealth agent for Telemann.

So when Music City Baroque, a period instrument ensemble in Nashville, allowed me to curate and direct my first program with them, I immediately thought of my secret love. How could I promote my guy without seeming to disrespect Herr Bach? 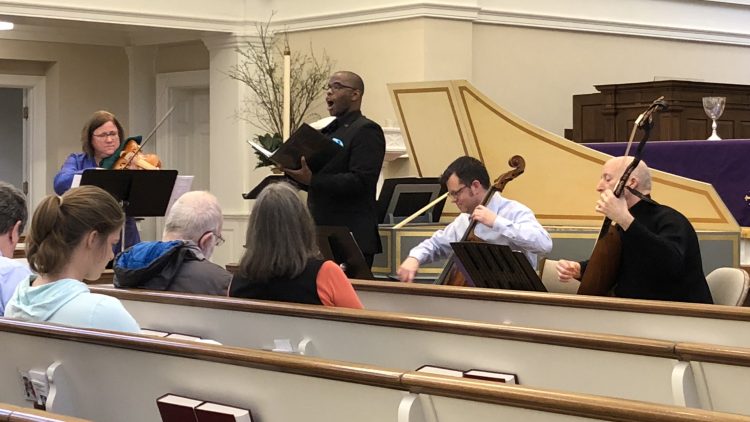 I decided to create a competition concert, entitled “Bach and His Rivals.” I wanted to encourage the audience to know that there are remaining treasures out there for Baroque music lovers. This concert would be held one week before BACHanalia, an annual Nashville festival of back to back Bach. Soloists, choirs, orchestras; partitas, cantatas, concertos; and even an arrangement of the Italian Concerto’s “Presto” for a bassoon quartet named “Bassoonery” would beckon audiences like homing pigeons.

I selected works by Handel, Bach, and Telemann: two one-movement keyboard pieces (Bach, Handel), two unaccompanied flute works (Bach, Telemann), two trio sonatas (Handel, Telemann), and two cantatas (Bach, Telemann). The audience would guess the composers on a program that named pieces and movements but omitted composers’ names. After the vote count, calculating who got the most composers correct, a winner and runner-up would be announced to receive gift baskets. We then ended the quiz program with a trick question, a charming quartet for traverso, two recorders and basso continuo by Johann Friedrich Fasch.

The Telemann cantata “Halt ein mit deinem Wetterstrahle” was the crowd favorite, followed by the Fasch. We had a special prize for identifying a Handel keyboard capriccio that was so much like Bach in exquisite counterpoint that even the professional Baroque players on the program were fooled. It was a grand success. Messiah lovers began to consider Handel’s keyboard music, Bach cantata lovers began to consider Telemann, and everyone began to wonder where Fasch had been all their lives. But most importantly, I felt certain I’d brought more Telemann devotees to the fold.