CD REVIEW — Founded in 2006, New York Polyphony has racked up mountains of well-deserved praise. Over the last decade, the ensemble has developed a world-class reputation for stellar musicianship and programming dedicated to both early and contemporary music. On their sixth album, Roma Æterna, the singers — countertenor Geoffrey Williams, tenor Steven Caldicott Wilson, baritone Christopher Dylan Herbert, and bass Craig Phillips — break with their own tradition and return to the past, focusing for the first time exclusively on early music. 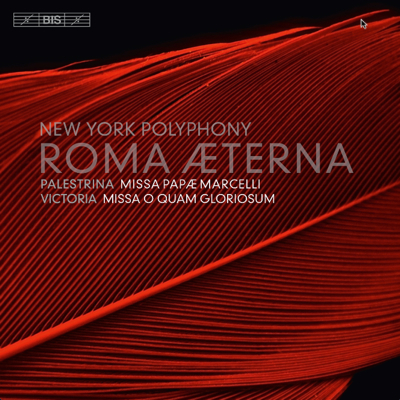 The thematic connections between the compositions, and even the album’s name, run deep. Rome was (and still is) the “eternal city,” a melting pot of international styles in various musical establishments and yet a conservative papal stronghold. Both Palestrina and Victoria worked in Rome; Palestrina was summoned by Pope Julius III to become the magister cantorum at the Cappella Giulia in 1551, later joining the Sistine Chapel Choir. Thanks to a later marriage, he had the financial stability to continue composing into his later years: over 100 masses, more than 300 motets, and a great number of other sacred and secular compositions survive.

Victoria, on the other hand, was a native Spaniard, as was Guerrero; Victoria left Spain for Rome at the tender age of 17 and six years later succeeded Palestrina as the chapel-master of the Roman seminary. Although he returned to Spain in 1587, Victoria came back to Rome briefly for Palestrina’s funeral in 1594. Guerrero, however, never traveled to Rome; instead, he went to Jerusalem, the other “eternal city.” The two settings of “Gaudent in coelis” were included in large part because of Victoria’s jubilant repetition of the phrase “exultant sine fine”—“rejoice without end,” a fitting tribute to the eternal nature of his adopted city.

The exceptional quality of the recording might also make listeners rejoice without end. In this day and age, there are plenty of recordings of the Pope Marcellus Mass, as urban legend surrounding its salvation of polyphony in the Church has caused it to be one of the best-known Renaissance compositions. The one-on-a-part approach here, though, makes it a stand-out option: far from being cautiously reverent, this rendition moves, swelling and dying like so many waves coming in to the shore. In this, as in the Tu es Petrus, the slightly faster tempos and the richly diverse timbres of the individual voices really make the antiphonal writing stand out.

Ivan Moody makes a comment in the liner notes that Palestrina writes “without ever losing a feeling of forward propulsion, of the dynamic springing from the static,” and in fact that statement is a perfect summary of the album. The ensemble sings with great drive, careful yet powerful phrasing, and unified purpose. Most highly recommended.