CD REVIEW — Mozart composed the Piano Concertos Nos. 11, 12, and 13, K. 413-415, one after another (actually 12 first, then 11 and 13) in late 1782, a year after he moved from Salzburg to Vienna. In his book Mozart’s Concerto Form (Praeger, 1971), however, Denis Forman places their first movements in three distinct categories: galant, melodic, and symphonic. When they were announced as a set that January, Mozart promised, presumably for marketing considerations, that the concertos could be accompanied by as little as a string quartet. Although these works might be considered Mozart’s calling card for 1783 — one that, in Forman’s terms, suggests past, present, and future — he was not able to get them published until 1785. 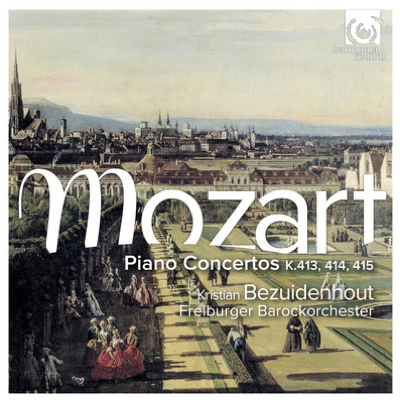 The brilliant fortepianist Kristian Bezuidenhout, a native of South Africa trained at the Eastman School of Music, has recorded these concertos with the Freiburg Baroque Orchestra as part of a series he has been doing for harmonia mundi. These are vibrant interpretations with a full-blooded orchestral texture and plenty of forward motion, and the solos are characterized by the artist’s customary imagination in phrasing. The engineering presents a well-delineated sound stage throughout, and careful miking picks up the pianist’s playing-along in opening tuttis, a nice combination of intimacy and grandeur.

In K. 414 in A major, Bezuidenhout’s instrument, a Paul McNulty copy of an 1805 instrument by
Anton Walter & Sohn, is crisp and clear, but some listeners might prefer the warmer sound of Steven Lubin’s 1981 R. J. Regier Walter copy on his 1986 recording with the Mozartean Players. It isn’t just that Lubin’s instrument is less glassy; his playing seems to hint at the world of the Countess in The Marriage of Figaro. With Bezuidenhout, we are confronted with a brash Cherubino. His playing of the opening Allegro of K. 413 in F major is fleet and forceful, even a bit ferocious, as if Mozart had a bee in his bonnet when he wrote it. By comparison, in a 1984 recording with the English Baroque Soloists under John Eliot Gardiner, Bezuidenhout’s teacher, Malcolm Bilson, playing a 1977 Walter copy by Philip Belt, seems to be seeking out moments of elegance.

With K. 415 in C major, Bezuidenhout’s recording comes into its own. Scored for an orchestra that includes trumpets and drums (surely Mozart knew that justice could not be done a quattro), the concerto’s opening Allegro is truly grand and symphonic. The Andante in F major has a heaven-sent, long-limbed theme that is developed to the nth degree. For me, the real pay-off is the concluding Rondeau: Allegro. Here, Mozart and Bezuidenhout’s playfulness find their match with many improvisatory readings of the written notes and teasing interpolations in the pauses — and there are two delicious interludes in the parallel minor that Mozart reused from his originally intended slow movement. After a final restatement of the rollicking opening theme, the movement ends quickly and quietly, not with a bang but a rumble. Wonderful.

Former EMAg editor Benjamin Dunham has reviewed recordings for The Washington Post and Musical America and currently serves as the classical music reviewer for The Sentinel in Marion, MA.