CD REVIEW — It’s been 20 years since Quatuor Mosaïques began adding the late Beethoven quartets to their repertoire. It’s been ten years since they recorded the Op. 18 quartets. So to celebrate the 30th anniversary of their formation while playing in Nikolaus Harnoncourt‘s Concentus Musicus Wien, they recorded the mighty last five in the Mozartsaal at the Wiener Konzerthaus. The wait was worthwhile: Their playing is so natural and communicative that fans will find gold in every measure and newcomers will wonder why the late quartets, aside from the Grosse Fuge, are considered so difficult. 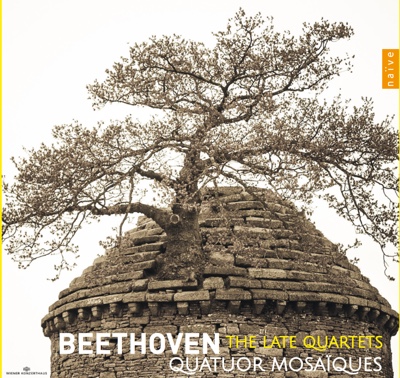 Quatuor Mosaïques’ Beethoven is different from performances on modern instruments in its ease. The sound comes so responsively off their gut strings that they can spin the composer’s long lyric lines effortlessly as if singing to silent words (such as in the Heiliger Dankgesang movement of Op. 132), be assertive and gruff when required without making noise (the sul ponticello stretch in the Presto of Op. 131), and handle tricky technical stuff with graceful fantasy (the Presto of Op. 130).

The jewels of the set are glorious performances of 127, 132, and 135. Op. 135 gains substantially in size and stature by not making a joke of the usually tiresome “Muss es sein?” dialogue.

Although the timings are within conventional norms, the playing is gentler than in most accounts, more concerned with internal movement and relationships, able to make rhetorical points without disrupting flow, more nuanced in the ensemble’s interpretation of dynamic and expressive markings — no absurd explosions at microsecond hairpins. The musicians have a sophisticated and flexible approach to trills and appoggiaturas, which means play them according to how much time exists to fit them in. And above all, they give full value to notes.

An additional distinguishing feature of this set is cellist Christophe Coin’s standing as a leading virtuoso. Because the quartets were written for a Russian count who was also an amateur cellist, they are strewn with impossible cello riffs into the stratosphere still feared by even the greatest conventional quartet players. Coin not only doesn’t fear them, he also resolves them with musical solutions that could serve as case studies. He even throws in a rare slide here and there to show he’s human.

Unfortunately, despite the fact that the substitute Finale for Op. 130 was one of Beethoven’s last and most fascinating thoughts, Quatuor Mosaïques did not record it out of respect for the original concept, which includes the Grosse Fuge. And on the first CD, Op. 131 follows Op. 127 with barely a pause — a jarring effect to avoid at all costs.

Otherwise, this is a treasure. Do not let it go.