CD REVIEW — With the release of its recording of Beethoven’s Symphony No. 9, compiled from live performances in Koerner Hall at Toronto’s TELUS Centre from February 4-7, 2016, Tafelmusik becomes the first North American period-instrument ensemble to record a complete cycle of the composer’s symphonies. The project, begun in 1998 under German conductor Bruno Weil, marks a landmark in Tafelmusik’s journey from the Baroque period into the 19th century — updating its musical equipment as required.

The usual objective in such projects by period ensembles is to peel away layers of interpretive accretions laid on by conductors and modern orchestras to reveal what Beethoven originally had in mind. Not, of course, “what Beethoven heard,” for his deafness had advanced to the point where he could only discern faint sounds at the Ninth’s unveiling at the Kärtnertor Theatre in Vienna on May 7, 1824. The composer was onstage to set tempos, but the conducting duties were covered by others. 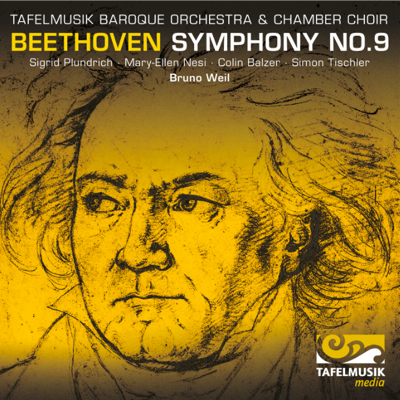 Stylistically, Weil and Tafelmusik, with artistic director emeritus Jeanne Lamon as leader (concertmaster), have adopted many of the standard period-instrument ensemble practices in the Ninth Symphony: brisk tempos, minimal if any vibrato (except the vocal quartet, which uses plenty), and lean, transparent textures. Listeners accustomed to the warm, plush string sound of modern orchestras may find Tafelmusik’s approach a bit austere. Period wind and brass instruments, though expertly played, can’t quite achieve the razor-sharp intonation of their successors.

Terse motives not joined into longer melodic phrases may also sound dry and vertical to modern ears. And 21st-century auditors who like to feel the stamp of a conductor’s strong interpretation on the canvas of an established work may find Weil’s objectivity a bit underwhelming.

Neither the mysterious opening nor the creepy coda of the first movement receives special attention. In the Scherzo, Weil smooths over Beethoven’s directions that the motive be treated in three-bar and later in four-bar phrases on subsequent appearances. The surprising modulations in the Adagio pass without comment. And there’s little adrenaline in the choral outbursts in the finale: although the tempos are convincing, everything seems reined in and controlled.

Balances are at odds: sometimes the excellent chorus sounds buried in the orchestra, elsewhere it dominates. Though there’s much lovely playing, winds don’t achieve the expected blend with strings, and violins often sound tinny. Inner details poke out of the ensemble that you’d never hear from a seat in the theater. And miking is so close that you clearly hear sniffing during the cello and bass recitative.

Tafelmusik’s reputation as an ensemble is distinguished, as is that of its Chamber Choir, led by Ivars Taurins. But somehow, this recording doesn’t accurately mirror the rave reports of critics who were on the ground for the live concerts.

At the end of the 66-minute performance, the audience responds with shouts and whistling. It makes us wish we’d been there to hear the real thing.

Daniel Hathaway founded ClevelandClassical.com after three decades as music director at Cleveland’s Trinity Cathedral. He studied historical musicology at Harvard College and Princeton University, and orchestral conducting at Tanglewood, and team teaches Music Criticism at the Oberlin Conservatory of Music.