Translation and the Idea(s) of Early Music

Why do we come back, again and again, to early music? What is it in the styles, the sources, the instruments, the communities, that draws us in and keeps hold of us?

There cannot, of course, be a single answer to any of these questions. The attraction of early music is different for each of us: it’s personal. Paradoxically, however, it’s the very personal nature of early music — the particular way in which we each think about it, play it, breathe life into it — that unites us.

I was reminded of this simple idea when I recently read a mesmerizing article in The New York Times Magazine about a new translation of Homer’s Odyssey by Emily Wilson, a professor of classics at the University of Pennsylvania. As much as any work of early music, the Odyssey has given rise to readings, re-readings, translations, and re-translations over the centuries. Although Wilson was discouraged from producing a translation, since many in academia consider them not to constitute “real” contributions to the field, she was convinced she had a unique way of understanding the Odyssey that could only be conveyed through her original translation.

And original it is. What Wilson stresses is that the process of translation is always subjective and that every choice of word counts. Translators need not be slavish. For a translator like Wilson, the text is open, ambiguous, suggestive, but not prescriptive. She gets to the very core of the issue in her interview with the Times, and this is a point that has far-reaching implications for the understanding of early music:

“The fact that it’s possible to translate the same lines a hundred different times and all of them are defensible in entirely different ways? That tells you something….[But] I want to be super responsible about my relationship to the Greek text. I want to be saying, after multiple different revisions: This is the best I can get toward the truth.”

If there is a “true” translation of the text, it’s far from obvious, as seen in the dozens, even hundreds, of translations of the Odyssey. Two apparently contradictory aspects of the act of translation are also complementary and mutually reinforcing: each translator might see a “truth” in her version, but she also recognizes the value of other versions, brought about by other perspectives.

For Wilson, and perhaps for all translators, the text opens itself to interpretation, just as so many genres, styles, and individual pieces of early music seem to call for a variety of understandings and interpretations by so many different players, listeners, and critics. If we disagree with some aspects of these interpretations, we must also be willing to live with the knowledge that in early music, few things are certain: While we grapple with treatises and period instruments and do our best to understand them, we may or may not be “right” in any or all of our choices.

But this uncertainty is also part of the beauty in the creation of early music. The text is a start, a sketch, a skeleton, more or less “thinly” notated. I draw this idea of “thin notation” from Bruce Haynes’s book The End of Early Music (part scholarly work and part manifesto), which stresses the need for players of early music to understand the purposely circumscribed role of the musical text and the open potential for numerous realizations:

“Baroque notation is like shorthand….Composers rarely included marks to indicate phrasing gestures, for instance, or dynamics, note-shaping, flexibility of tempo, and subtlety of rhythm. Variables of that kind are implied in the playing style, however, so performers supplied them as a matter of course.” (Haynes, The End of Early Music, p. 4).

These are the variables that we are responsible for realizing — the variables that make the music take on the quality of a rich and meaningful language. Like translators, we extrapolate from the ambiguous text, which can accommodate an array of readings but demands that each performance “take a stand” by committing to one version at a time.

Haynes further points out that “thin writing was not thin because ‘thick’ writing hadn’t been invented yet; it was deliberate.” Composers chose to leave major aspects of interpretation to performers, trusting that the spontaneity and fragility of performance would endow the music with the sense and meaning that it required in the moment. Players of early music accepted that responsibility with gusto and sometimes resented composers who were too prescriptive. (This formed one of the grounds on which Johann Adolph Scheibe attacked Johann Sebastian Bach, claiming that Bach notated on paper “everything that one thinks of as belonging to the method of playing.” [New Bach Reader, p. 346]) No two players would render a single piece in the same way, and each performance was a realization of its own — a translation from the thinly notated score into the language of sound. 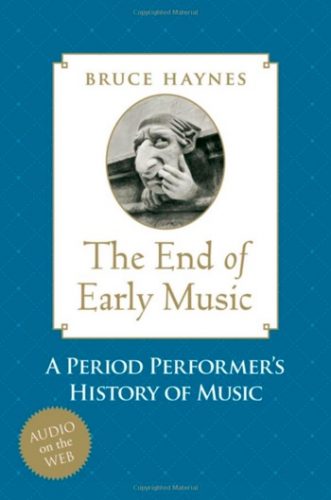 It wasn’t just in the variables Haynes lists (phrase shapes, dynamics, and so on) that each performance of a given work represented an individual translation of the score. Instrumentation, too, was a problem with multiple solutions. The “work concept” — a work’s core identity, what makes a given work that work, and not some other work — was highly flexible in early music. We know that this was true in the 16th century, for example, when instrumentalists frequently played vocal repertoire, adapting it freely to suit the needs and capacities of their particular instruments. But it remained true in some genres in the late-18th and early-19th centuries.

In chamber music, in particular, the melodic shape, harmonic profile, and, above all, the affect of a composition could be preserved even as the instrumentation changed. J. S. Bach and G. F. Handel most famously, but hundreds of their contemporaries as well, transferred sonatas from one medium to another. Bach’s G-major sonata for viola da gamba and obbligato harpsichord (BWV 1027) exists in a version for two flutes and basso continuo (BWV 1039). The first, second, and fourth movements of the same sonata also survive in a version for solo organ (BWV 1027a and 1039a), with the notes distributed among the player’s two hands and feet.

Some scholars have wondered whether this last version was created by Bach or by one of his students. However, I would suggest that notions of “creation” and “authorship” do not fully apply in the case of these different versions of a single work. Rather, teachers and students produced various versions of the same musical material for use in pedagogy and performance. Any student trained in the chamber-music practices of mid-18th-century Germany and other regions would have understood that such works could be played in any number of instrumentations; the choice would depend in large part on the instruments and players available — and those who wished to join in.

Writers, including this one, often call the practice of transferring a work from one instrumentation to another “arrangement.” But perhaps this term is misleading. It suggests that there is one “correct” version, and the others are copies — less valuable and less true. For many or most chamber works of the 18th century, this view is anachronistic and problematic.

What could we call these multiple versions instead? Could we entertain the term “translations”? It captures the unstable nature of the text. After all, it’s the meaning as much as the medium of the work that really matters.

In one of her many impassioned pleas for sensitivity to historical style and performance practices, the harpsichordist Wanda Landowska broached the issue of translation. Frustrated with performers who refused to learn anything about early performing practices, she wrote, “What would you think of an actor who did not try to understand the meaning of certain words in poems from the Middle Ages and who would leave the proper placement of accents to the good luck of his inspiration?” (Landowska, Landowska on Music, p. 96)

But for Landowska, the need to study the language of both early poetry and early music did not necessitate adherence to a single “correct” version, any more than expert scholars of Homer need all agree on a single English translation. The act of translation is an artful act — one that draws on the translator’s expertise as well as her personal experiences and convictions. Landowska knew this and, indeed, insisted on it: “There are a thousand different ways of interpreting a piece without ever getting away from its character.”

Harpsichordist and musicologist Rebecca Cypess is founder of the Raritan Players. She is Associate Professor of Music at the Mason Gross School of the Arts, Rutgers University, and an affiliated faculty member in the Rutgers Jewish Studies Department. Her publications include Curious and Modern Inventions: Instrumental Music as Discovery in Galileo’s Italy (University of Chicago Press, 2016), and she is co-editor of Sara Levy’s World: Gender, Judaism, and the Bach Tradition in Enlightenment Berlin, forthcoming from the University of Rochester Press.