BOOK REVIEW — The guitar in the 17th century became the favorite instrument of Louis XIV and Charles II, both of whom were inspired by the magical touch of Italian guitarists like Francesco Corbetta, Angelo Bartolotti, and Giovanni Paolo Foscarini. However, the surviving books of strummed and plucked tablatures are somewhat vague as to how to execute the music and tune the guitar. Lex Eisenhardt has thus written a book on the subject, Italian Guitar Music of the Seventeenth Century. Based on his extensive research and experience in playing the repertoire, Eisenhardt not only explores primary sources, but he also debates the ideas of other Baroque guitar specialists active since the 1970s. 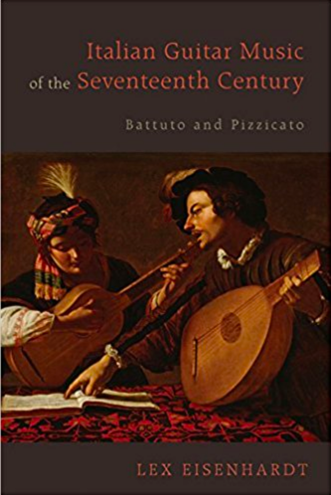 The literature for Baroque guitar is extensive, dating from the early 17th century through the 18th century. Central to this repertoire are Italian prints and manuscripts of 17th-century solos and songs. The publications vary as to purpose and intention, ranging from simple beginner’s manuals to collections of solo music suitable for the skills of virtuoso performers.

Whereas 16th-century music for renaissance guitar and lute is relatively straightforward, having been published for accomplished amateurs to play mostly as written, guitar students in the 17th century were expected to learn to harmonize music using guitar “alfabeto” chords and, later, figured bass. The necessity for acquiring these improvisational skills, combined with the existence of many mistake-ridden period publications of uninspiring music, has discouraged many modern students from discovering the gems of the repertoire.

Eisenhardt, a faculty member at the Conservatory of Amsterdam, does a good job of guiding his readers through the maze of challenges and developments in notation. He believes strongly that most Italian players strung their guitars with both low and high (in octaves) 4th and 5th strings, all in plain gut, as this makes the low strings less dominant than modern overspun basses. His conclusion is a reasonable one, though it may not be the only one, since the music is often ambiguous enough that other specialists in the field have settled on other tunings as their principal “all-round” solution.

I especially enjoyed the author’s comparisons between different period solutions. In one instance, he gives two different alfabeto chord realizations of the same melody with figured bass. In another example, he provides an alfabeto realization versus a plucked setting for guitar in Italian “lute” tablature of a balletto by Foscarini. Finally, Eisenhardt shows how guitarists of Corbetta’s time rewrote the master’s complex and peculiar pieces, simplifying them and making them more understandable as music.

A few odd moments do occur in Eisenhardt’s writing: a facsimile of a ciaccona by Corbetta is given in which the final variation is to be played in “repicco” (strums alternating a right hand finger and thumb) in six even eighth notes. The original is completely clear rhythmically and contains no errors; in his transcription, Eisenhardt has, without any explanation, chosen to interpret the rhythmic pattern as two quarter notes followed by four sixteenths, giving a completely different notation (and thus, a different effect) to the variation.

I was happy to learn some new things from Eisenhardt, but I was surprised to read his claim that the technique of “campanelle” (small bells) “appear(s), probably for the first time, in Kapsberger’s third book of music for the chitarrone (1626).” To cite two contradictory examples, however, Bellerofonte Castaldi’s book Capricci a due stromenti (Modena 1622) for theorbo/chitarrone (from which Eisenhardt quotes elsewhere) is full of “campanelle,” and Pietro Paolo Melli’s Intavolatura di liuto attiorbato e di tiorba, Libro V (Venice 1620) has the occasional hexachord in campanelle.

In his observations about the lack of clarity in notation of the “battuta” style in French tablature, Eisenhardt appears to be unaware of Étienne Moulinié’s Airs de cour avec la tablature de luth et de guitarre…Troisième livre (Paris 1629), a book containing 12 songs in which the strummed style is written in clear French tablature, with open strings indicated, as well as strum directions.

Eisenhardt makes it clear that the Baroque guitar has some very attractive repertoire that should be regarded as an important piece in the puzzle of 17th-century music. This music is best left in its original notation (tablature) and not transcribed, as a transcription would always be extremely subjective and would limit the player’s options in interpreting the voice leading, chords, and tunings.

Italian Guitar Music of the Seventeenth Century is a very helpful tool to aid the newcomer to the Baroque guitar. I recommend it, as reading this book had the right effect on me: to make me eager to come back and spend more time with this music.