CD REVIEW — The title of this captivating disc featuring gambists Robert Smith and Paolo Pandolfo was inspired by a passage from The Division Violist, an instruction manual by the English composer Christopher Simpson (c. 1604-1669): 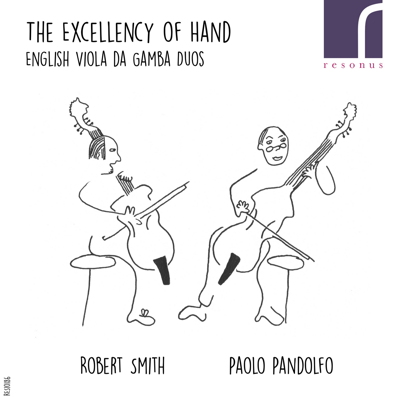 A Ground is written out on [2 sheets of] paper; one for the organ etc.; the other for him that plays the viol who, having the  ground as his theme, plays such variety of descant or division as his skill and present invention suggest. In this manner of play, a man may show the excellency both of his hand and invention, to the delight and admiration of those that hear him.

There can be no doubt that the four hands on this release animating duos by Simpson and compatriots John Jenkins (1592-1678) and Simon Ives (1600-1662) are excellent in every way. To say, however, that Smith and Pandolfo “invent” the music before them would be misleading. The art of improvisation may have been a requirement when the three English composers created their duos, but the 22 pieces on the menu of The Excellence of Hand represent the music as written.

As suggested in the quote above, the viol player took the ground and “divided” long notes into shorter, faster ones by way of ornamentation. The result could be graceful and lyrical or fiery and virtuosic. Both examples are here in abundance as Smith and Pandolfo make their expressive way through numerous divisions (and airs with divisions), many of which are preceded by brief preludes — some lasting less than 20 seconds. Not all of the preludes date from the 17th century: Smith is the composer of a Prelude in A minor whose harmonic pungencies are definitely of our time.

The range of atmospheres and textures in these pieces is remarkable. The viols converse in the most charming manner, when they aren’t sharing grave sentiments or trying to outdo each other with torrents of lightning-quick notes. As employed by Ives, Jenkins, Simpson, and Smith, the viols evoke colors and emotions that bring out unanticipated aspects of these instruments.

Or does this have something to do with the exceptional artistry of certain British and Italian viol players? Smith and Pandolfo are of like mind wherever the pieces send them. More than an hour’s worth of duos might prove a challenge if the music and the performances were less than compelling. But there’s never any danger that the ear will wander as Smith and Pandolfo  immerse themselves in these delectables.

The gambists aren’t afraid to produce robust sonorities in the most extroverted passages, or to whisper to one another when the mood turns austere. In many of the divisions, they share and interweave phrases with a seamless dexterity that rivets the attention. The end result, with a nod to Simpson, is “delight” that can only elicit an active listener’s bountiful The “admiration.”

Donald Rosenberg is editor of EMAg, The Magazine of Early Music America.