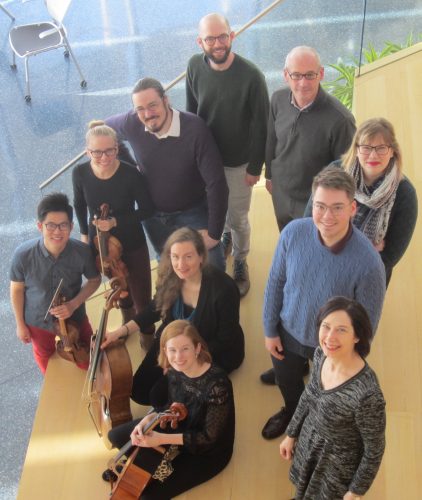 The Case Western Reserve University Baroque ensemble will perform as part of Early Music America’s Young Performers Festival, May 24-26, 2018, as part of the Bloomington Early Music Festival.
The CWRU Baroque Chamber Ensembles, Dr. Julie Andrijeski, Director, are open to undergraduate and graduate music students at CWRU and the Cleveland Institute of Music (CIM) with a serious interest in performing 17th– and 18th-century music on historical instruments.
Diverse groups (4-6 per semester) ranging in size from three to eight players meet one to two hours per week to explore repertoire ranging from the late 16th century to ca. 1800. The ensembles generally perform one or two concerts per semester. Oftentimes the chamber ensembles collaborate in larger projects with other CWRU ensembles such as the Baroque Orchestra, Collegium, and the Baroque Dance Ensemble. This year, the ensembles focused on several special projects that explored various historical pitches, from 392 to 430 to 466, depending on the repertoire.
The ensembles performing as part of the Young Performers Festival are made up solely of graduate students in CWRU’s Historical Performance Practice program, with the addition of Dr. Peter Bennett, musicologist and teacher of harpsichord at CWRU and the Cleveland Institute of Music. Debra Nagy acted as guest director for this program.
2018 Young Performers Festival Program

“A musician no longer arrives in France without a sonata or a cantata in his pocket.“

Thus the Mercure of November 1713 reported on the Italianate vogue that was sweeping away Paris at the beginning of the 18th century. We are in the late reign of Louis XIV, whose repeated absences during Versailles’ entertainments had prompted a migration of the courtiers out of the palace. As Georgia Cowart observes, freed from the adulatory disguise they had to wear in front of the king, a transformation in the type of entertainment they were consuming, as well as their taste began to take place. The infiltration of Italian gusto into the French musical scene, if welcomed by ardent defenders and patrons, was not totally devoid of chauvinistic criticism. The solution? Imprint the French gracefulness in Italian forms.

Our Festival program will present two of these cosmopolitan works: “La Piémontoise” from François Couperin’s monumental collection Les Nations; and “Pyrame et Thisbé,” a cantata by Michel Pignolet de Montéclair that, according to its composer, is both epic and dramatic.