A Noted Violinist Shares His Approach To Bach

BOOK REVIEW — Stanley Ritchie’s new volume, perhaps best described as a memoir of his lifelong engagement as both performer and pedagogue with these core works, offers his preferences for fingerings, bowings, dynamics, articulations, tempos, and much more, intermingled with thoughts on performance styles, aesthetics, the history of music, and many other topics. 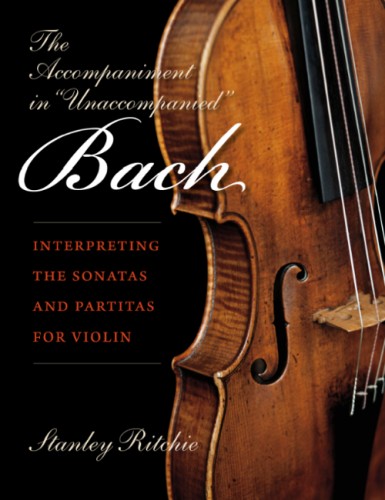 Violinists exploring this folio-sized book might well find its greatest interest lies in the multiple examples appearing on almost every page (including an occasional instance in Bach’s own handwriting). Many examples are replete with Ritchie’s fingerings, bowings, and dynamics, as well as analytic re-notations of Bach’s music that add a bass line or show the underlying, multi-part counterpoint (as suggested by the opening five words of the title). Ritchie’s preferences will often challenge violinists to think about their own tastes in such matters.

Consistency is not a concern. For instance, Ritchie repeatedly urges violinists to play down-bows and up-bows “as they come,” no matter the result (such as up-bows on downbeats, different bowings of the same motive in successive measures, or up-bows on three- and four-note chords). But just as frequently, he asserts that Bach’s slurring is often open to interpretation — in effect making it a matter of choice when to play down-bows and up-bows.

And yet elsewhere, he recommends consecutive up-bows or down-bows.  Likewise, he repeatedly cites advice concerning the dynamics of slurred notes from Leopold Mozart’s 1756 treatise on violin playing — the most extensive and authoritative such 18th-century publication, although its relevance to Bach’s older style is questionable — to argue that each successive note under a slur should be softer. In other places, Ritchie marks groups of slurred notes with crescendos.

In these matters, as in so much else, the value for readers will be to evaluate how one violinist who has immersed himself in these pieces during a long creative life has made decisions, what factors he has invoked to rationalize those decisions, and in what matters he has changed his mind.

While Ritchie explains that many violinists will play these works on a modern violin using a Tourte-style bow (not yet invented when Bach composed them by 1720), he clearly prefers playing with early 18th-century violins and bows or only using techniques that were playable on such instruments. In general, his advocacy on these matters is soft. But a harsh or even mocking tone occasionally intrudes (as when he criticizes “institutionalized pedagogical laziness” or refers to a common manner of playing a passage in the Chaconne as “a bizarre mixture of the comic and the violent”).

Despite the imprint of a major university press, the editing of the book is surprisingly inadequate. The musical examples — surely the core content of the volume — lack numbers, captions, and measure numbers, frequently making it impossible to locate which measure of an example Ritchie is referring to (unless one consults another score that has measure numbers). Composited examples of identical passages too often have different accidentals, omit an essential accidental, have different beamings or slurring, and the like.  Analytic examples of the very same passages often differ from one another.

All of which makes it surprising that Ritchie adamantly insists that Bach purposely omitted an occasional accidental (although elsewhere Bach himself sometimes caught such errors and corrected them), resulting in harmonies unknown in the Baroque period in at least one case. A more creative publisher would have adopted a binding like that used for sheet music, so that the book would more easily lie flat on a music stand, easily allowing violinists to try out Ritchie’s recommendations.

Joel Lester, Professor Emeritus at the Graduate Center of the City University of New York, scholar, and violinist, is the author of Bach’s Works for Solo Violin: Style, Structure, Performance (Oxford University Press, 1999), winner of the ASCAP-Deems Taylor Award, author of Compositional Theory in the Eighteenth Century (Harvard University Press, 1992), winner of the Society for Music Theory’s Wallace Berry Publication Award, and author of articles on Bach’s music and compositional process. For twenty-two seasons, he was violinist in the Da Capo Chamber Players.