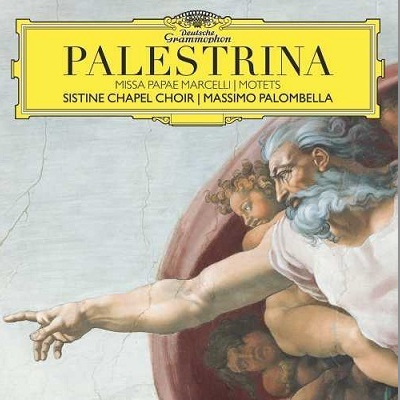 But two developments made it happen. The current director of the choir, Massimo Palombella, invoked the spirit of Vatican II — the ecumenical council initiated by Pope John XXIII that ran from 1962 to 1965 — which stated that the church should engage in a dialogue with modern culture and not remain so cloistered. And it took an enlightened Pope Francis — who happens to be a knowledgeable classical music buff (in an interview, he discussed his preferences for conductors like Wilhelm Fürtwangler and Hans Knappertsbusch!) — to give the go-ahead for Deutsche Grammophon to make the first recordings in the Sistine Chapel with what is the Pope’s choir.

The first release, Cantate Domino, was a sampler of music from Gregorian chant to Palestrina, de Lasso, Victoria, and Allegri, most of which was written expressly for performance in the Sistine Chapel. This followup CD is devoted entirely to Palestrina: the Missa Papae Marcelli and nine short motets, two of which (“Veritas mea et misericordia mea” and “Jubilate Deo”) are listed as first recordings.

Missa Papae Marcelli is the most recorded of all of Palestrina’s works; the piece’s discography goes all the way back to 1927. Yet DG claims a scoop: that this is the “world premiere recording” of the original 1567 version of the Missa long hidden in the Vatican archives. The main difference is the omission of Agnus Dei II, which, according to Palombella, was not authorized by Palestrina to be performed in this context, so instead the singers repeat Agnus Dei I, replacing the words “dona nobis pacem” with “miserere nobis.”

In the time between this recording and its predecessor, some lessons seem to have been learned in the art of recording in this space. Built in 1483, the Sistine Chapel is a highly reverberant room — wonderfully so if music heard there is meant to be a sensual or spiritual experience. But for music as intricately polyphonic as Palestrina, it is a highly problematic environment if clarity of voices has any priority. Many other recordings have been made of the Missa in reverberant locales, but none of the rooms on the recordings I’ve sampled have as long a decay as the Sistine Chapel.

For this Missa, however, the choir’s 30 adult and 20 boys voices sound a little clearer and more closely miked than on Cantate Domino, though the syllables are still hard to make out — ironic for a performance of a work that in its time, as Palombella puts it, “saved polyphony by ensuring the intelligibility of text.” Nevertheless, this is a marvelous, well-trained, sensitively phrasing choir, and when the treble voices soar into the airy, resonant acoustics, they achieve both the spiritual and the sensual all at once.

Even ye of little religious faith may find it easy to lose yourselves in these luxurious sounds.