Meet the Organetto, the Original Laptop

Attend a few organ recitals in a church or concert hall and you’ll know that the instruments can vary widely in size — from behemoths with several thousand pipes to moveable, chamber models with just a handful of stops.

Almost completely forgotten, though, is that an even smaller kind of pipe organ once existed. Called an organetto, it was typically played perpendicularly on a performer’s lap and was one of the most popular instruments in the 13th and the 14th centuries.

A contemporary reproduction of this tiny organ will be front and center this week when the Chicago-based Newberry Consort presents Music Fit for the Medicis, featuring works that would have been heard at the powerful family’s court. Showcased will be 14th-century songs and dances taken from manuscripts found in the library of Lorenzo de’ Medici (1449-1492). As a powerful Renaissance banker and patron to Leonardo and Michelangelo, Lorenzo was de facto ruler of Florence, which was the center of organetto music-making.

Featured as the Newberry’s organetto soloist will be Chilean-born Catalina Vicens, an internationally known historical keyboard performer and teacher who lives in Basel, Switzerland, and Bologna, Italy. She is artistic director of the Museo San Colombano, housed in a former monastery in Bologna, which dates to the Seventh Century. She also serves as curator of the Tagliavini Collection, the museum’s prize holding and one of the largest historical keyboard collections in Europe. (EMA recently published a review about another rare keyboard instrument housed at the Museo San Colombano.) 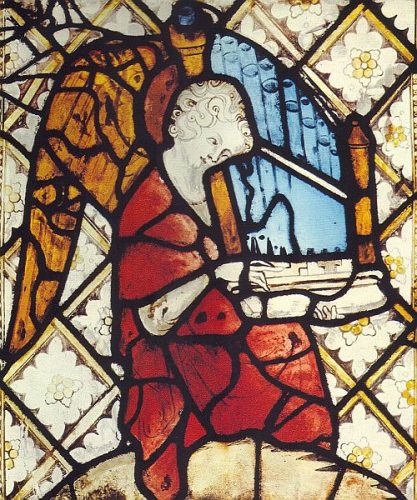 Unfortunately, there is no extant example of a historical organetto, which sometimes goes by the name of portative organ or just a portative. Some full-scale medieval organs do still exist, at least partly, in their original configuration, like the instrument from around 1425-39 in the Church of St. Andreas in Ostönnen, Germany. But the organetto fell out of fashion by the 16th century. “They weren’t use in anymore, as far as we know, and they didn’t survive,” Vicens told me.

What experts know today about the organetto comes from its depiction in hundreds of medieval paintings, illuminated manuscripts, and stained-glass windows, and well as the literature of the period. The instrument is mentioned, for example, in the Roman de la Rose, a famous medieval poem written in Old French, and the organetto playing of Francesco Landini, a famed 14th-century Italian composer and organist, is described in a novella by Giovanni da Prato.

Today’s organettos, which are based on this historical imagery and documentation and technical knowledge drawn from larger extant medieval organs, typically have 28 pipes in two rows spanning just beyond two musical octaves. “From iconography, we see mostly instruments with fewer pipes,” Vicens said. But balancing historically informed instrument building with modern performance needs, she points out that, “for us, it is very convenient to take those models with more pipes, because we want to be able to play more notes.” Air is produced by a bellows operated with the left hand while the right plays the instrument’s keys. Before the invention of electricity, all standard pipe organs required someone in addition to the keyboardist to pump the bellows. For the organetto, the player can be completely autonomous. That was part of its appeal.

The organetto gained new popularity in the 1970s and ‘80s among certain amateur musicians, because of do-it-yourself assembly kits that became available. The fervor soon faded. Interest has picked up again, sparked in part by courses that Vicens began teaching to music students in 2011 in Switzerland, Italy, Canada, and Sweden. She estimates at least 20 to 30 professional players in Europe regularly perform on the organetto.

Because no original organetto exists, it is impossible to know exactly how the medieval instruments sounded. The aural qualities of today’s organettos vary depending on the builder and are affected by the pipes, which can be made of such materials as copper, wood, or a tin-lead alloy. “It does sound like a small organ,” Vicens said of the instrument, “but to the ears of many, also suggested by how it looks, it sounds more like a bagpipe. Or I’ve even gotten people who think it sounds like an accordion.” 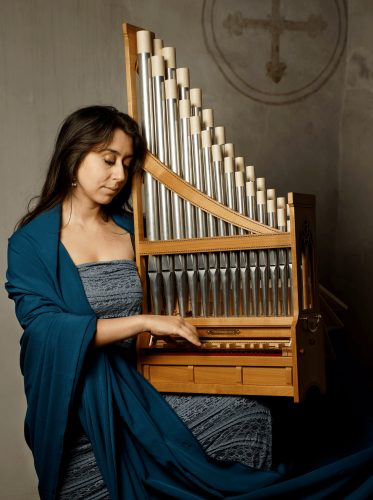 Vicens often performs on an organetto built in 2013 by Stefan and Annette Kepler, who run the Wolkenstayn Gothic Organ company in southern Germany, with pipes in a high-leaded alloy made by Winold van der Putten in the Netherlands. “I have sort of a custom instrument by different builders,” she said, but, for her Chicago appearance, she will be performing on a similar instrument by the same makers that the Newberry Consort acquired in 2018.

While a student of harpsichord performance at the Curtis Institute of Music in Philadelphia, Vicens became fascinated with the instrument’s sound and how it was produced. That curiosity led her to study the harpsichord’s origins, including how instruments from several centuries ago were constructed and what early repertoire was written for them. Her interest in turn motivated her to learn about other historical instruments like the organ and fortepianos. Drawing on this background in historical performance and her knowledge of the organ and harpsichord, Vicens taught herself to play the organetto in 2009 and 2010 and soon got regular requests to perform on the instrument across Europe and beyond.

The organetto poses two main hurdles for performers, starting with playing the keyboard with just one hand, which makes it difficult to convey different musical voices at the same time. The larger challenge is manipulating the instrument’s single bellows. “I have to breathe like a singer,” Vicens said, “because with one bellow, you need to fill it every time you run out of air.” For woodwind or brass instrumentalists, air flow is part of their music-making from the moment they begin learning their instruments, but that’s not case with a keyboard player. She had to teach herself how to use the air to shape and evoke musical phrases. “It’s not just mechanically pushing air into the instrument, but also using it musically, which I think is the biggest challenge,” she said.

In general, though, she believes the organetto is not a difficult instrument to play. “It’s, in fact, an instrument that imposes a whole range of limitations but opens a whole lot of possibilities. It’s a wonderful instrument to make music with.”

The repertoire for Music Fit for the Medicis was chosen by Newberry artistic co-director David Douglass, who will also perform. The program brings to life music by such composers as Jacopo da Bologna and Bartolino da Padova and includes several settings of poetry by Lorenzo de’ Medici. Douglass drew primarily from two manuscripts in the Medici library dating to the beginning of the 15th century. According to Douglass’ program notes, the Squarcialupi Codex, named for its original owner, Antonio Squarcialupi, organist at Santa Maria del Fiore in Florence, includes 335 works and is the largest source of music from the prior century. The second manuscript contains 119 works and is known as the London British Library Additional Manuscript 29987 or simply 29987.

“I would say this is the golden age of the organetto repertoire,” Vicens said of the pieces on the program. “So, I’m really happy and grateful for the invitation and all the work that the Consort has done for getting me there.”