Fabrice Fitch’s introduction to Renaissance polyphony is the latest installment in the series of Cambridge Introductions to Music. These books are pitched at undergraduate and graduate students, but Fitch’s volume will appeal equally to performers and early-music enthusiasts. It shines as a teaching resource, and I am looking forward to assigning it to my own students. Indeed, this volume is a welcome complement to Tess Knighton and David Fallows’s widely read (if by now a bit dated) Companion to Medieval and Renaissance Music (1998). Those with access to an academic library may be able to consult an electronic copy through the Cambridge Core platform; others can take advantage of Cambridge’s decision to release it immediately in an affordable yet handsomely produced paperback edition. 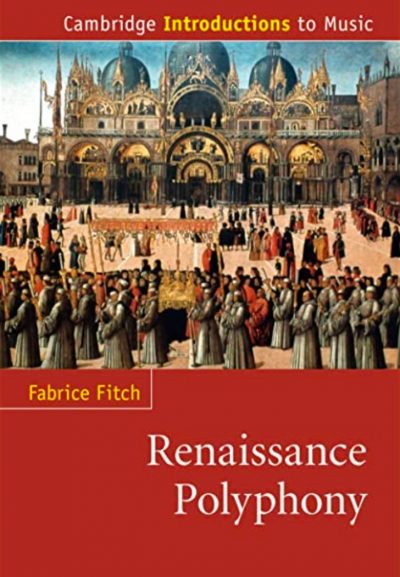 In Western music, “The Renaissance” remains a contested notion, as Fitch explores in his first chapter. In this volume, the designation covers roughly 1440–1600, bounded on the front end by the anonymous Missa Caput and its novel texture featuring a low-range contratenor and on the back end by another textural development: the independent bassline. Greater emphasis is placed on music of the 15th and early 16th centuries. Understandably, given Fitch’s scholarly interests, Du Fay and Josquin feature more prominently than Palestrina and Lassus.

Unlike other histories of Renaissance music, Fitch’s is not organized chronologically, nor does it spend much time on individual composers. Instead, its thematic organization arises from the repertoire. It would sell this book short to say that it strictly limits its subject to the forms and functions of polyphony. Although Fitch’s account is firmly grounded in the surviving pieces, it does not shy away from signaling other areas of interest, such as extemporized polyphony, the role of women musicians, and the theoretical concept of pitch. The breadth of topics Fitch covers in this slim volume is remarkable. Every page introduces a new thread one could follow without ever getting bogged down. Well-chosen chapter titles and section headings make the book a breeze to navigate, though Fitch’s sparklingly clear prose invites cover-to-cover reading.

The first three chapters address foundational questions of periodization, sources and forms of knowledge, and the types of individuals who fall under the umbrella of “musician.” There follow four chapters that discuss how Renaissance musicians understood fundamental musical concepts of pitch, voices, notation, and genre. The last of these prompts a further series of three chapters dedicated, respectively, to the genres of mass, motet, and song, following Johannes Tinctoris’s categorization. Chapter 11, “Scoring, texture, and scale,” stands out for its treatment of an important topic that often takes a backseat to counterpoint and cantus-firmus treatment. Chapter 12 offers a concise but thorough primer on the promises and pitfalls of “musical borrowing.” Chapter 13 delights with its discussion of “Canons, puzzles, and games,” in which fanciful and enigmatic examples deepen our understanding of topics addressed earlier in the book.

A concluding chapter on performance practice is as useful for its approach as for its content. Fitch motivates this discussion by asking, “How can two performances of the same piece sound so entirely different?” before proceeding to arm readers with the ability to (begin to) answer this question, addressing pitch level, musical ficta, tempo, texting, and instrumentation. These pages brim with opportunities for hands-on exercises and assignments. They also bring full circle Fitch’s main agenda: helping modern listeners engage with the sounds of Renaissance polyphony. It is a joy to encounter such a wealth of sensitive musical discussions by a scholar-composer whose publications have brought us closer to the works of Johannes Okeghem, Jacob Obrecht, and Alexander Agricola, among many others.

The volume is generously illustrated, with more than 60 musical examples and an accompanying website that includes full editions of 19 compositions. I would have preferred that examples be presented in unreduced values or at least at a consistent level of reduction, with the voices on individual staves. Multi-voice examples featuring frequent voice crossing become difficult to read, though this presentation facilitates realization at the piano, which can be a valuable exercise. Every example includes incipits showing original clefs, key signatures, and note values, so it is always possible to infer aspects of the original notation.

Fitch has given us a compact yet nuanced account of a splendid period in music history in a book that is as deeply musical as it is rich with possibility.

Emily Zazulia is Assistant Professor of Music at the University of California, Berkeley. Her monograph Where Sight Meets Sound: The Poetics of Late-Medieval Music Writing is forthcoming from Oxford University Press.