Begun as a response to the pandemic lockdowns in 2020, this CD launches a Bach cantata recording project by the Oakland-based Cantata Collective, a group of Bay Area period-instrument players (mostly from the Philharmonia Baroque Orchestra). Featured in this first installment are two gifted Baroque specialty singers, soprano Sherezade Panthaki and countertenor Reginald Mobley. Nicholas McGegan, the Philharmonia’s music director emeritus, is at the organ. 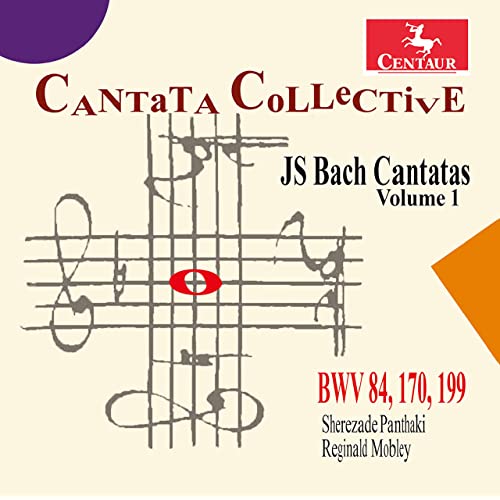 With choral ensembles largely unavailable (or at least unthinkable) in 2020, the Cantata Collective here presents a sampling of the solo-cantata repertoire in an engaging, intimate setting of one-to-a-part performances.

Most notably, undergirding the whole experience are the inventive continuo realizations by McGegan, as well as his nimble contribution in the two organ obbligati in BWV 170. McGegan, rightly recognized as one of the top interpreters of Handel, is also surely in this Bachian repertoire — along with Ton Koopman — one of the most skilled (but often-overlooked) keyboard continuo players.

The most impressive singing on the recording comes from alto Reginald Mobley, in BWV 170, particularly in this cantata’s otherworldly, basso continuo-less aria, “Wie jammern mich,” suspended in time and space (much like the aria, “Aus Liebe,” from the Matthew Passion). Mobley’s dramatic declaration of the recitatives is also particularly engaging, but his delicate, sensitive approach in the opening movement would benefit from a more generous vocalism in his upper register, especially at the ends of phrases, giving the “oo” vowel for “Lust” and “Brust” the same expressive beauty and weight as “Ruh.”

Oboist Marc Schachman’s expertise is on display in the CD’s opening track, in the long, arching lines of BWV 84’s first movement. With both oboe and soprano winding in and out of major and minor modes, suspensions and resolutions underpinned by an occasional pedal-point bass, Bach here suggests no easy answers and portrays the “keen and quivering ratio” (to quote Emily Dickinson) of life’s agony and ecstasy. The nimble, lyric soprano of Sherezade Panthaki is on beautiful display, especially in her spot-on intonation and flexibility, but sounds lightweight in the cantata’s recits (especially the penultimate accompagnato) and often without any ornamentation in the da capos, where some would be welcome (as in “Ich esse mit Freuden”). The final chorale is here performed simply, with affect, by the soprano voice and instrumental ensemble.

BWV 199 begins with a dramatic accompagnato recitative (three of this cantata’s four recits are expressively scored by Bach for the full ensemble). This sets the mood for the opening aria, “Stumme Seufzer” which itself is interrupted by a brief secco recit before the da capo, thus blurring the lines between aria and recitative. If only the singer and oboist could fill the lower notes with the richness of tone they both give to the glorious upper reaches throughout. The backing-off vocally at the ends of phrases – perhaps in approximation of the limited sostenuto of the shorter Baroque violin bow – weakens the expressive intent and sounds unnecessary, since any limitation a singer and partnered oboist might share would be breath capacity – something that both of these two fine performers have in abundance.

In the expansive central aria, “Tief gebückt” (here clocking in at a broad 9:38), we hear Bach’s closest-ever approach to the mature vocal writing of Handel (as in the arias of the oratorio Theodora, especially “As with Rosy Steps the Morn”). Perhaps a slightly quicker tempo would help support the flow of this profound piece, as would also a more solid vocal foundation for the lowest note of that first descending line, on the words “Tief ge-bückt (“Deeply bowed”).

Of notable mention in the Weimar-version of BWV 199 presented here is William Skeen, who particularly shines in the cello obbligato of the chorale-prelude movement, “Ich, dein betrübtes Kind.”

For me, it is impossible to listen to this solo cantata repertoire and not recall the visceral impact of the late, great mezzo (and former frequent Philharmonia Baroque collaborator) Lorraine Hunt Lieberson. Her performances of BWV 199 (and BWV 82, “Ich habe genug”), both in the devastatingly beautiful Peter Sellars-staged performances and the audio recordings with Emmanuel Music, were transformative experiences and still represent a gold standard.

One often hears the music of Bach described as “indestructible” — that is, impervious to any transcription or interpretation due to the perfection of its craft. While I tend to agree, it is in this recording that I was often found wanting more, especially from the singers’ connection to the text through their vocal delivery.

The great pianist and Bach-champion Rosalyn Tureck once said in an interview (presumably about the Goldberg Variations), “I don’t play this work as a tour de force, as a dazzling display of technique — I play it as a life experience.” And while not every performer can match her level of communicative artistry, or that of a Hunt Lieberson (or sopranos Elly Ameling and Arleen Augér), it is these artists who remind us of the rewards when a full humanity is explored within the historically informed practice of their own time.

As an added bonus, the little duet “Wir eilen” (from BWV 78) is included as a delightful “encore” to this recording. The unbridled joy of the performance comes through in the expertly executed melismatic singing and exemplary right-hand ornamentation in the organ playing in the da capo.

So, is Volume 1 of this new installment a panacea for our current pandemic? Maybe, maybe not, but Gilead needs a balm. So, to the excellent musicians of the Cantata Collective: send more Bach, please!https://www.youtube.com/watch?v=0r6Jhc7AMAQ

Jeffrey Baxter is the choral administrator of the Atlanta Symphony Orchestra, where he sings in its all-volunteer chorus and was an assistant to Robert Shaw in his final years. Jeff holds the doctorate in choral music from The College-Conservatory of Music of the University of Cincinnati.