On the Breath of Angels. The Breathtaking Collective. passacaille 1091

The title of this latest release by The Breathtaking Collective draws as much on the art world as it does on that of music. The cornetto was very popular from the mid-1500s until the 18th century, and during that time it was frequently depicted as an instrument played by angels, often alongside a singer. This album therefore delves into this symbolism twofold, as it is constructed primarily around the musical pairing of the cornetto (Bruce Dickey) and the voice (soprano Hana Blažíková) — but also around works referring to angels. 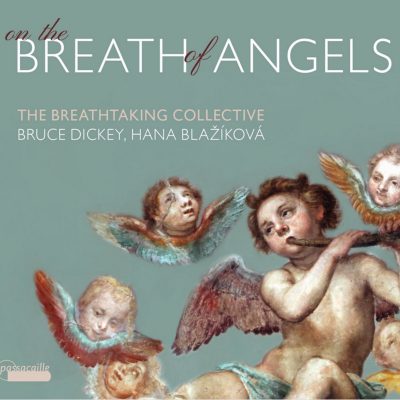 The repertoire is wide-ranging, indeed: Given the cornetto’s popularity in late 17th-century opera, a number of excerpts from Giovanni Bononcini’s Il Trionfo di Camilla and Alessandro Scarlatti’s Il Comodo Antonino are included. Of particular interest are the first three selections, all sacred works from a manuscript discovered at an auction some two decades ago, the compiler of which is the unfortunately smudged “Carlo G…” Other, earlier works here are by Bononcini’s father, Giovanni Maria, as well as by Francesco Cavalli, Sigismondo d’India, and Giovanni Pierluigi da Palestrina, on whose motet Dickey provides his own diminutions. Rounding out the album are a trio of newer works: Erik Satie’s Les Anges has been beautifully arranged for voice and theorbo, while the Collective also commissioned works by Ivan Moody and Julian Wachner. Moody chose to set a Byzantine liturgical text, Wachner verses by early 20th-century poet Rupert Brooke.

The ensemble is aptly named, for the album is, in a word, breathtaking. Dickey mentions that the newly composed works aimed to exploit the expressive possibilities of, and the similarity in timbres between, voice and cornetto, but such aim accurately describes the entire recording. When both the voice and cornetto enter in the opening “Panis angelicus,” for example, there is a split second when it’s difficult to tell which is which. That uncanny valley returns every time the two arrive at a perfect unison or octave — listen to “Videte miraculum” or the beginning of Moody’s “O Archangels and Angels” — or soar through strings of parallel thirds, as in “Sicut sponsus matris.”

Blažíková’s soprano is exquisitely suited to this material; she is in perfect control of her phrasing, dynamic range, careful deployment of vibrato, and sensitivity to text. The virtuosic Dickey is more than a match for her, nimbly adding ornamentations with style and grace without ever overshadowing the rest of the ensemble. In fact, I would not have been surprised if his cornetto had suddenly concluded with a verbal “Amen” at the end of “Angelus Domini descendit,” so vocal is his playing.

The ensemble shimmers in Bononcini’s Sinfonia, performed with a lightness that beautifully contrasts the emotional weight of Wachner’s preceding “The Vision of the Archangels.” The Satie also provides a necessary moment of stillness and reprieve from the exciting “Camilla.” And the newly commissioned works are, in a word, stunning. The “Vision of the Archangels” soars and entwines, builds and diminishes, with absolutely gut-wrenching beauty, while the dissonances in “O Archangels and Angels,” and their subsequent resolution, are delicious to the point of pain.

For musicality’s sake, and for the excitement of the repertoire, both old and new, this is an album not to miss.