François Devienne (1759-1803) was a well-known Parisian musician in the late 18th century. He was one of the earliest teachers at the Paris Conservatoire, a pedagogue who wrote a popular practical methods book for the flute in 1793, and apparently an exceedingly fine performer to boot, playing both bassoon and flute for theater orchestras and solo occasions. He also composed hundreds of pieces over his lengthy career, all of which reflected the most popular genres of the day: operas, symphonic works, and a variety of chamber compositions. On this album, flutist Joanna Marsden joins forces with harpsichordist Mark Edwards to perform five of Devienne’s flute sonatas, two of which are accompanied by an introductory prelude. 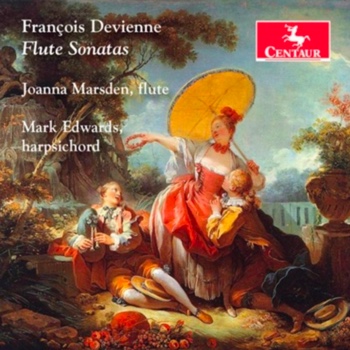 These preludes in and of themselves tell us a bit about Devienne’s compositional, and likely also performative, approach. He and his colleagues at the Paris Conservatoire did not particularly see eye to eye on flute technique; while the others were more interested in newer technical innovations, larger ensemble playing skills, and the primacy of a single melody as established by Jean-Jacques Rousseau, Devienne continued to write and teach in an older style that emphasized ornamentation, improvisation, and fuller basse accompaniment. The preludes included here thus reflect this tendency toward continuing to improvise or provide improvisatory introductions to his sonatas.

Devienne was also an advocate for the one-keyed flute, an instrument that was threatened by the four-keyed flute preferred by his colleagues. Marsden performs these works on a late 18th-century one-keyed flute made by Tortochot.

Lest anyone think of this instrument as a transitional or less capable flute, Marsden performs dazzling virtuosic passages (listen, for example, to the beginning of the Sonata in D minor or the end of the third movement of the Sonata in D major) and explores the entirety of the instrument’s range throughout the recording. Its lowest register is surprisingly warm, as evidenced in the Sonata in D major, while passages across the upper ranges are bright and surprising in their projection. In all cases, the beautiful timbre of Marsden’s flute is well matched by that of Edwards’ harpsichord; he manages to realize the basse in a way that prioritizes the flute’s melody while at the same time playing an equally interesting role full of rhythmic and rhetorical vitality.

Devienne’s sonatas tend to include graceful melodic lines, a supportively rich accompaniment, and frequent sections of virtuosic technical display peppered throughout. The ones chosen on this recording are some of the more challenging, and both Marsden and Edwards handle the material with grace and verve. As Marsden’s debut recording, it is one that shows a great deal of promise. A worthy addition to any flute-lover’s library.