The career of Santiago de Murcia (1673–1739) was one of exciting highs and disappointing lows — what we know of it, that is. From 1704 to 1706, he was the primary guitar teacher to Queen María Luisa, wife of King Felipe V of Spain. At least for a while, Murcia lived with his patron, Francisco Andriani, and in 1714 he dedicated his treatise Resumen de acompañar la parte con la guitarra to him. He is best known for this treatise and for three anthologies of music for the guitar, possibly copied in his own hand. All four works are filled with dances of myriad international origins, improvisatory passacalles, and Italianate sonatas. 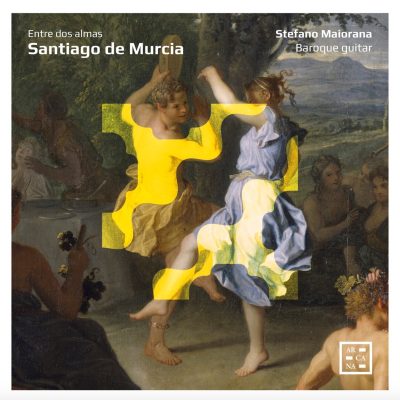 They were influential in their own time, and educational in ours; the Resumen, for example, is a comprehensive and oft-cited treatise on guitar basso continuo, while the three anthologies contain some of the earliest examples of genres like the fandango and transmit multiple versions of some works, which tells us a bit about how they might have been performed. They also speak to the popularity in Murcia’s Madrid of composers like Corelli, Scarlatti, and Lully. Murcia’s music was even carried to Mexico, though likely not by himself. Unfortunately, his renown did not translate into financial success, and in 1729 he and his wife declared themselves impoverished, a condition in which he apparently lived for the last 10 years of his life.

On this latest album, guitarist Stefano Maiorana explores the rich musical traditions Murcia left behind in his compilations, especially the contrasts between the Italian and Spanish styles Murcia knew so well. Of the Italianate works, we are treated to Murcia’s transcriptions of Corelli’s sonatas, Op. 5, though with some liberties: his Sonata in E minor combines movements from two of Corelli’s Op. 5 sonatas and adds a fourth Despacio of his own, while Maiorana performs what survives of Murcia’s transcription of Corelli’s sonata Op. 5, No. 3, with intervening movements of his own.

Two sets of Folías are featured here, one imitating the Italian style, while the other, the Folías Gallegas, are based on a popular Galician tune. The Spanish dances, in contrast, feature a stronger rhythmic and percussive drive. Maiorana leans heavily into the latter, to great effect: his percussive use of the strings and body of the guitar shines on the opening Fandango and, most strikingly, in the central section of the Tarantelas.

Throughout the album, Maiorana creates a vivid array of moods and tone colors, often within the same work; listen, for example, to his version of the Canarios, which alternates between a softer and somewhat muted approach and a full-bodied, reverberant tone. The slower, more delicate works, such as the opening Grave to the Sonata in E minor, are treated with gentleness and a palpable affection. Maiorana points out that the multiple versions of these works suggest they are prompts for performers to breathe their own life into them, and so he does; the close miking captures every brush of a fingernail, every breath of phrasing, with an inviting intimacy.

It’s an appealing album, and undoubtedly it has something to gratify old friends of Murcia and newcomers alike.