The Food of Love: Songs, Dances, and Fancies for Shakespeare. The Baltimore Consort. Sono Luminus DSL-92234.

The arrival late last summer of this new album was fortuitous indeed. As a well intentioned but perpetually lagging participant in the Shakespeare 2020 Project, a public reading group whose members set out to read the complete works in a year, I’m delighted to have another recording of Bard-ish music to accompany my literary journey. And who better to make such an album but the Baltimore Consort, founded in 1980 specifically to perform the music of Shakespeare’s day? 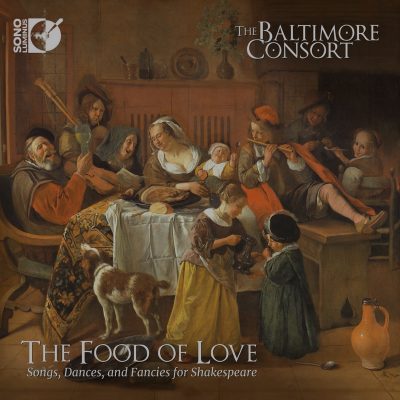 As the liner notes explain, music shows up in Shakespeare’s works in several ways. In many cases, specific songs are included in the texts themselves, some authored by Shakespeare, others popular tunes of his day. Shakespeare also frequently referred to music and instruments in general. Lastly, there are numerous directions scattered throughout the plays, indicating that some sort of music would have been performed at certain moments. All of these types of music appear on this album, which is organized by play.

For example, the first set of works stems from As You Like It; the opening numbers, “The Buffens” (The Clowns) and “Kemp’s Jig,” appear nowhere in Shakespeare’s works. But the star of the play was the clown Will Kemp, about whom the latter work was written, and in whose honor the first tune is included. The third and last song in the set is Thomas Morley’s well-known madrigal “It was a lover and his lasse,” which Kemp’s character Touchstone requests. John Dowland, Anthony Holborne, and Shakespeare’s favorite lutenist, Robert Johnson, appear alongside anonymous dances and ballads, some of which, like “Greensleeves,” are still well-known today. Detailed context is given for each of the album’s 28 selections, making the liner notes both an educational read and an interesting insight into the planning and creation of the recording itself.

Despite this being the Baltimore Consort’s first album since 2009, the decades of time and care the group has spent with this repertoire, and with each other, shine through from its first moments. To fans of the Consort, the recording will feel delightfully familiar. Mindy Rosenfeld’s flute winds comfortably around the burnished sounds of Mark Cudek’s cittern in “My Lady Carey’s Dompe,” while the beautiful variety of timbres in the plucked and bowed strings are put on fine display in the Dowland set for Hamlet. It’s clear that they have such fun together, and with this material — listen in particular to the concluding “Fairie Rownde” and “Robin Goodfellow.”

The Consort is once again joined by soprano Danielle Svonavec, who has been a guest vocalist on and off since 1999. Her voice is well suited to this material, clear and expressive, and I find her lower register particularly compelling; listen, for example, to “When Griping Grief” and “Robin Goodfellow.” Her adoption of a lower-brow accent on “Gravedigger’s Song” may not immediately be to everyone’s taste, but I found that I quite warmed up to it on repeated listenings.

On the whole, this is just about everything one might expect from the Baltimore Consort. It’s fun, it’s varied, it’s well planned and even better executed. Let us hope we don’t have to wait another decade for their next release.