Given the popularity and renown of works such as The Four Seasons or even his Gloria, it might be hard to imagine that large swaths of Antonio Vivaldi’s works remain largely unknown, at least in recorded form. 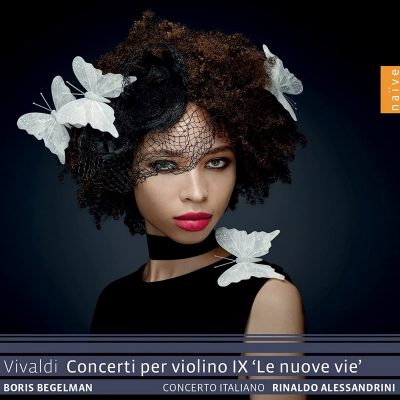 Yet that is apparently the case, though perhaps not for much longer, thanks to musicologist Alberto Basso and the Vivaldi Edition, a project begun in the early 2000s. The Italian National Library in Turin happens to hold a significant collection of Vivaldi’s autograph manuscripts, containing nearly 450 sacred and secular vocal works, concertos, and operas, and prior to the Vivaldi Edition, little of it had been yet recorded or performed. This new release, the 67th entry in the series, sees the return of Concerto Italiano and welcomes into the fold the violinist Boris Begelman.

The album is dedicated to six of Vivaldi’s later violin concertos. All written around or after 1720s, and therefore likely postdating The Four Seasons, they reflect Vivaldi’s efforts to adapt to the new galant trends sweeping through his native Venice — the nuove vie of the album’s title. The new style preferred a lighter texture, an increased emphasis on melody, simpler harmonies, and even phrases, and an expressive manner of ornamentation and rhythmic gesture that sought to capture a vocalist’s nuance.

Vivaldi demonstrates in these concertos his ability to interpret these new trends within his own already established style. Each of the six is its own beast, showing Vivaldi exploring new ways of creating dramatic tension by contrasting fast-paced and virtuosic writing in the solo violin with the impressive dynamic shifts of the F major concerto, or the gentler, even melancholic lyricism of the Bb major and the D major concertos, the animated dance movements in the A major and C major concertos, or the French style of the D major concerto. These works reveal a world of human expression, from the moody, dark, and introspective to the light, buoyant, and cheerful, but each contains more than a hint of Vivaldi’s wit.

They are played here with exceptional energy and a finely attuned sense of taste. Begelman tackles even the most difficult of the passages with a deliciously punchy edge but also manages to create beautiful, tender melodic lines — compare, for example, the agility in the concluding Allegro of the F major concerto with the dreamy, song-like Largo in the same concerto, or the beautiful arioso in the Largo of the Bb concerto. He and the ensemble are in perfect sync throughout; every crisp articulation, every breath, every bit of weight on a suspension or a moment’s grace in a melodic line is echoed with admirable precision on all sides. The album is, in a word, revelatory.

These works manage to be unmistakably Vivaldian while at the same time utterly new and surprising — and fun, to boot. May we see many more collaborations between the Vivaldi Edition and Concerto Italiano, with Begelman at the helm.