One new recording of Niccolò Jommelli’s Requiem would be a historical and musical gain. Emotive, inventive, and concise, it was perhaps the most popular setting of this religious text before Mozart’s masterpiece. This year, the release of two excellent new period-instrument performances of Jommelli’s work is worth celebrating. 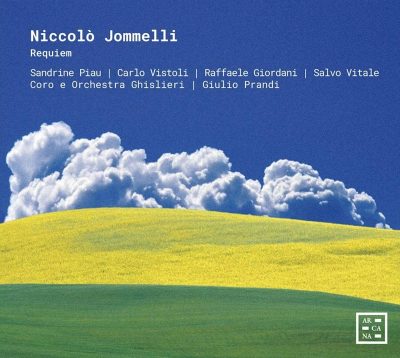 The Missa Pro Defunctis in E flat for Four Voices, Strings, and Continuo (HocJ A1.3) was written in 1756 during the Neapolitan composer’s time in Stuttgart. After rousing success in opera houses throughout Europe and choice appointments in Venice and Rome, Jommelli became music director for the court of Carl Eugen, Duke of Württemberg, a music lover and former pupil of C.P.E. Bach. Jommelli was given room to stretch as a composer while leading one of the best orchestras in Europe. It’s no wonder he stayed there for 16 years before returning to Naples shortly before his death.

His Requiem was composed for the funeral of the duke’s mother. Over a hundred copies across Europe indicate its continuing ability to move and impress listeners. This music accompanied services for the likes of Canova, Gluck, and Louis XV, with its “Introitus” heard as late as 1868 for Rossini’s funeral.

Scored modestly for vocal soloists, chorus, strings, and continuo, this setting of the Requiem supplies calm (rather than fear or awe) in the face of death. It also shows Jommelli equally gifted in the austere sacred style as well as opera. Double fugues like “Pie Jesu” and “Quando coeli” and dramatic moments like a literally trembling “Tremens factus” and the chromatic declarations of “rex tremendae majestatis” all contribute to an overarching sense of flow and unity. 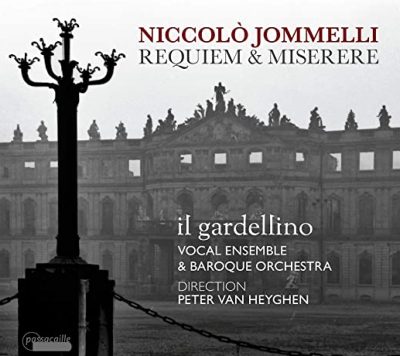 With these new CDs, listeners get two distinctive lenses onto the work. Both orchestras feature strings in 4-4-2-2-1 plus organ, an average size at the time of this Requiem’s premiere. The Brussels-based ensemble Il Gardellino and director Peter Van Heyghen’s vocal forces also copy those heard at the first performance: two singers for each soprano/alto/tenor/bass part and everyone taking turns as a soloist. Based in Pavia, Italy, the Ghislieri Orchestra and Choir under Giulio Prandi opts for choral parts evenly divided among 20 singers alongside four designated soloists. The Italian ensemble’s male choristers also sing Gregorian chant as antiphons between movements as they might have been heard in this piece’s heyday.

Comparisons of the two recordings come down to musical priorities and emotional approaches. Il Gardellino provides a more assertive reading and overt crafting by the conductor. String accents and vocal entrances are strongly defined in terms of phrasing and rhythm, making for an especially ominous “Kyrie eleison.” Van Heyghen also highlights dynamic contrasts, like those in “Oro supplex.” Gardellino’s “Domine, Jesu” has a gradual and shapely feel that clarifies the words and textures. Polyphonic lines passing off to one another sharply, especially in “Hosanna,” and tempos are generally brisker.

If Gardellino offers an embrace, Ghislieri’s more restrained approach gives counsel. They take their time through several movements to build a conversational air. Of course, the larger chorus adds a different balance, but its voices actually enter a little softer despite their size. In “Christe eleison,” they take on a plaintive quality. The orchestra sometimes answers with comforting advice, and at other times tightens into intimidating replies. “Sanctus” assumes a pastoral delicacy in Ghislieri’s reading. In “Dies irae,” scurrying string become rhetorical figures echoing the prophesies of the text. Soprano Sandrine Piau adds a contrasting theatricality to Ghislieri’s take, for example her voice opening up and then pausing between climactic orchestral phrases in “Salva me.”

These two CDs are the first new recordings of Jommelli’s Requiem since a 1991 Bongiovanni release by a large Moldovan ensemble in a lushly non-historical interpretation. Historical research and practice really do enlighten performance! Both albums are a testament to the performers’ imaginations, as well as the possibilities of this work.