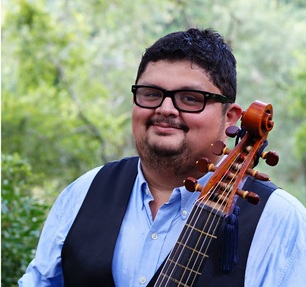 Pedro Funes is currently the Assistant Orchestra Director at Oak Ridge High School in Conroe, Texas. He graduated from the University of Houston where he majored in Double Bass performance under Dennis Whittaker. He was the Head Orchestra director at Park View Intermediate School for 3 years. In addition, he received his Master’s Degree in Early Music at Indiana University’s Historical Performance Institute at the Jacobs School of Music where he was the recipient of an Associate Instructorship. Mr. Funez studied viola gamba and vielle with Wendy Gillespie and performed baroque bass in the IU Baroque Orchestra under Stanley Ritchie.

How did you (personally) come to the field of Early Music?

I became interested in Early Music when I was a high school student and played double bass. We would often play concerto grossi by Corelli, Locatelli and Torelli and I fell in love with the style of music and found that I enjoyed playing the continuo lines.  During my undergrad  at the University of Houston where I was pursuing my studies in double bass performance I met Matthew Dirst and introduced me to the viola da gamba. As they say, the rest is history! I immediately contacted the local viol group and started taking lessons with Carter Crawford. By the end of my first year on the viol I realized this was where my passion lie so in 2010 I moved to Indiana and to further my education at the Historical Performance Institute at Indiana University with Wendy Gillespie.

How did the Viola da Gamba program at Oak Ridge High School start?

Since I have started teaching at the Oak Ridge High School in 2011, my chamber music partner, Stephanie Raby, and I have been doing demonstrations of the viol and early music for the students. They consistently showed interest in the instrument during our performances, however there were no instruments available for them to learn to play on. I was excited by their enthusiasm for the instrument so I applied for the VDGSA’s Loan Consort Program and was granted 6 viols. Supplemented by a couple of instruments loaned by Viols of Houston 14 students were able to participate in an after school program. When she was in town, Sarah Mead would help coach the groups and give the kids playing a boost. The program was so successful that in 2016-17 it will become an actual class during the day.

Tell us about your most memorable concert experience.

The final recital this May for the viola da gamba students was a great one. It was that moment when all they learned finally clicked, and they understood what it was to play in a chamber group. They like all the repertoire that I pick for them, and I am constantly amazed how much they like all of this “old stuff”. It is great to work with students who are so enthusiastic and curious about the viol and its repertoire.

It is a very rare day that I have free time with my hectic schedule working a full time job and volunteering with several non profits. On that rare occasion though, I like to read a good book or spend time with my cats Marais and Elsa.