CD REVIEW — In 1565, the Spanish-born Tomás Luis de Victoria arrived in Rome. He enrolled as a singer at the Collegio Germanico, a Jesuit school; ten years later, he took over as choirmaster. 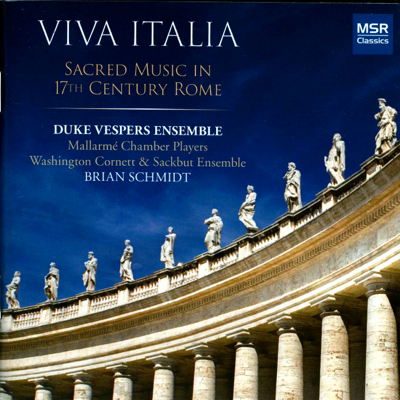 Thus marks the starting point for the repertoire on this album, recorded live in concert in 2015. It is the second release from the Duke Vespers Ensemble, a chamber choir at the Duke University Chapel under the direction of Brian Schmidt. All of the composers on the album spent significant time in Rome, although several works were composed elsewhere. In fact, all but Giovanni Pierluigi da Palestrina were also affiliated with the Collegio Germanico.

Victoria’s settings of the Marian antiphons Ave regina caelorum and Regina caeli, both featured here, were among the earliest in the polychoral style then fashionable in Rome. Additionally, instrumental doubling of vocal lines, a practice familiar to the Iberian peninsula, increased dramatically at the Collegio Germanico after Victoria’s appointment. The organ was particularly popular, accompanying the smaller motets. The chamber orchestra and brass ensemble, however, perform both from original 17th-century parts and modern arrangements. The instrumental accompaniment for Victoria’s Ave regina caelorum is new, while the decision to double the voices on Marc-Antoine Charpentier’s Dixit Dominus stems from markings in his score. The prelude to this psalm setting was specifically composed for instruments, as were the verses in alternatim with the choir in Giovanni Felice Sances’ Ave maris stella.

At the center of the album is the world-premiere recording of Sances’ Missa Sancta Maria Magdalenae. Sances, a boy soprano in the Collegio Germanico, later became a member of the Habsburg court in Austria, where he spent the remainder of his life and career. This particular mass might have been composed for the Feast of Mary Magdalene in 1665 after the Emperor Leopold I’s marriage to Princess Eleonore Magdalena Theresia.

The first recording of a particular work, whether good or bad, is always notable. Fortunately, this recording does justice to a work of the style and substance of this mass. Schmidt’s ear for timbral blend serves the performance well. The vocal and instrumental ensembles, and the seven guest soloists, are clear and well balanced, and the soloists in particular blend superbly. The twinned ascending lines on “Et ascendit” in the Gloria of the mass are stunning, as are the duets between soprano and alto in Sances’ Ave Maris Stella and between countertenor and tenor in his Vulnerasti cor meum. The organ and violone come through especially clearly in the mix, adding warm support to the lower registers.

On the whole, the recording is a thoughtful variety of textures, moving easily from chant to a cappella motets to Baroque-style concerted works. While the newly recorded mass and other works by Sances are real gems, I find the simple, homophonic Alma Redemptoris Mater to be one of the album’s more beautiful selections. A truly welcome addition to any Renaissance or Baroque music lover’s library.