CD REVIEW — In 1443, King Henry VI of England founded Eton College. This would prove to be a profoundly important event for music history, because over the next fifty years, the College would sponsor a unique collection of choral music for the College Chapel, notated and passed down to us today in the Eton Choirbook. The manuscript, compiled in the first few years of the 16th century, originally contained music from about 24 composers, but it was later damaged, and only a little more than half of the original material survives. That it survives at all is astonishing, since its repertoire — Latin liturgical music largely for the Virgin Mary — was targeted for destruction during Henry VIII’s dissolution of the monasteries just a few decades later. As such, several of the composers preserved in the Eton Choirbook, such as John Sutton and Robert Hacomplaynt, are known only from that source. 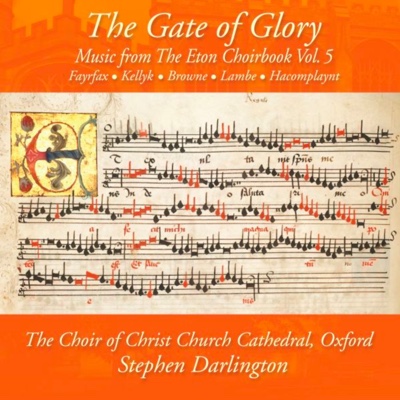 Having been composed over several decades, the music in the Eton Choirbook reflects the changing styles in 15th-century English polyphony. So, too, do the five works on this recording. Earlier pieces, such as Hugh Kellyk’s seven-part setting of Gaude flore virginali, tend to create variety in texture by alternating between reduced and full numbers of voices. The next generation of composers used more imitative textures, sometimes utilizing the cross-relations so often favored by composers like Thomas Tallis. They also preferred to set borrowed material as a cantus firmus, but in an upper voice, a particularly English approach. John Browne, for example, puts the borrowed chant in the third highest voice in his O regina mundi. The later repertoire is represented here by Robert Fayrfax’s Magnificat and Hacomplaynt’s setting of the Salve Regina, which continues to develop earlier interests in imitation, rhythmic complexity, and changes in texture.

The real centerpiece of this album by the Choir of Christ Church Cathedral, Oxford, is Walter Lambe’s setting of Gaude flore virginali, a world-premiere recording. It begins with a stunning lower-voice duet into which more voices are gradually added. From there, it grows lustrously, swelling in both dynamic range and rhythmic activity through the end of the first major section, only to begin again with another reduced section, expanding outward until the full weight of the ensemble is brought to bear on the remainder of the piece. It’s a simply gorgeous interpretation of Lambe’s subtle craftsmanship.

It is also one of the only pieces on the recording to not make use of the boy trebles. Three of the remaining four works rely heavily on these high voices, a remarkable feat given the endurance and virtuosity demanded of them. They and director Stephen Darlington are to be commended for their nuanced, sensitive performances, especially in the exposed treble/lower voice duets in the Magnificat and Salve Regina. The ensemble as a whole, whatever its makeup, does a marvelous job in bringing out the overlapping waves of imitation and internal drive, especially at the end of the dauntingly long Kellyk.