CD REVIEW — In recent years, our understanding of the development of the Classical Viennese style has changed dramatically, all due to one composer: Johann Baptist Vanhal. While Haydn, Mozart, and Beethoven still tend to be household names, Vanhal is not. And yet, as the Eybler Quartet points out on its new recording, he was in fact quite the groundbreaker. He was the most published Viennese composer in the 1770s, the first composer to work primarily outside of the typical bonds of patronage, and, insofar as we have any solid idea of the actual number of his compositions (which remains unclear), second only to Haydn in string quartet and symphony output. 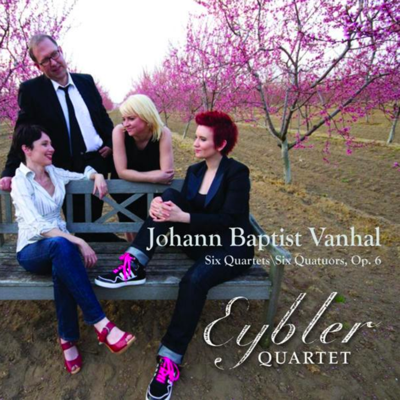 Vanhal also led a fascinating life. He was born into servitude in 1739 in Nechanice, Bohemia, and in his early 20s relocated to Vienna, where he became well enough known as a teacher and performer to earn sufficient money to purchase his freedom. He cultivated relationships among the aristocracy and various European publishing houses, and by the time he was thirty, his Op. 1 was published and he was sent on tour to Italy by a baron in Dresden. After his return from Italy, he settled in Vienna, where he lived until his death in 1813. He composed in all of the main genres of the day and published heavily for both public and church audiences. He also adopted elements of the Italian style that he encountered while on tour, moving away from dense counterpoint and toward memorable melodies, clearer, simpler harmonic motion, and the nascent sonata-allegro form.

The Eybler Quartet, founded in 2004 at least in part to bring attention to lesser-known composers such as Vanhal, presents on this recording his six Op. 6 quartets. Written while he was on tour, they were published in 1771 by the Parisian publishing house Huberty. Such early string quartets were often in three movements, instead of the later four; indeed, all six of these have only three movements in a typical fast-slow-fast arrangement. Unusually, all six are in a major key. Presenting them in back-to-back fashion, then, as on this disc, runs the risk of becoming stagnant, twee, or falsely cheerful.

Fortunately, Vanhal meets his match in the Eybler Quartet. Not only does Vanhal write infectious, charming, and downright interesting music, the ensemble also approaches it with an equally infectious vivacity, dynamism, and edge. This is a recording with wit, but an informed wit, one that taps into the myriad facets of emotion Vanhal writes into the quartets. The musicians play with a familiar wink and recognition of a kindred spirit, and as they themselves put it, these quartets in a way resemble a “slightly tipsy Maggie Smith sipping a mimosa” — acerbic, bubbly, spirited, and beyond reproach.