Opera cuts to the chase—as death does. An art which seeks, more obviously than any other form, to break your heart.

In modern times, going to the opera can break your wallet as well as your heart. If you’d care to catch tonight’s Metropolitan Opera production of L’Elisir D’Amore (The Elixir of Love) for example, tickets start north of $80, and you’ll pay more than four times as much for the privilege of taking in Donizetti’s lighthearted romp of love and intrigue in the Basque countryside. To be sure, your pricey ducats deliver opulent sets, exquisite costumes, and the gold standard of operatic performance by the world’s leading singers and performers. Just be sure to bring your, er, opera glasses if you’re sitting back in the cheap seats! But just as the Early Music movement has led the way in transforming how familiar works of repertoire are played and heard in the concert hall or chamber salon, the grand operatic tradition is also getting reimagined, both in historically-informed and thoroughly postmodern ways. Take for example, Heartbeat Opera, a fledgling opera company growing up in the shadow of the MET, praised by the Wall Street Journal for “reformatting the opera experience from the grand to the deliberately intimate.” Pledging to return to “the essence of opera,” Heartbeat Opera’s leaders Louisa Proske & Ethan Heard present a very different vision of what a night at the opera should mean: 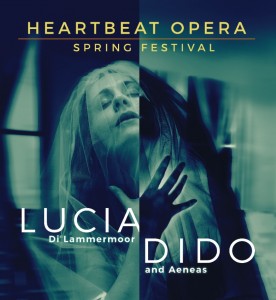 What if it were possible to experience opera classics, with the singers only feet or even inches away from you, and the miracle of the operatic voice happening so close you could feel the vibrations of a great aria pulsating on your skin? What if the dramatic performance matched musical mastery, with acting that was bold, and specific and unafraid of comparison to great theatre acting? This is what we propose for our new opera company – work that is intimate, powerful, physically and emotionally committed.

Starting tonight, Heartbeat Opera opens its 10-day Spring Festival with an unusual double bill: The small company will present alternating performances (with overlapping casts) of Lucia Di Lammermoor (Donizetti again!) and Henry Purcell’s masterpiece Dido and Aeneas.  Both performances will be staged in the intimate Theatre at St. Clement’s, a church-cum-Off-Broadway theater that’s been home to a wildly diverse series of productions for more than a half-century.

As visioned by director Ethan Heard, the Dido production will feature just five singers, who will perform both as soloists and comprise the chorus. Joining them: six instrumentalists on 17th-century style period instruments, along with a scattering of very 21st-century audience members.Giving the whole thing both a contemporary feel, and, it could be argued, staying to true to the work’s 1689 origins as a High School Musical.

Really! The “playbill” for the first documented performance of Dido and Aeneas, (considered not only one of Purcell’s greatest works but one of the best English-language operas of all), reads as follows:

The words made by Mr. NAT. TATE

As music historian Emma Riggle puts it: “It’s not every day that a student production becomes one of the highest-regarded operas in the history of English music, but that’s exactly what happened to Dido and Aeneas.

“Maybe it’s because the show has a little something for everyone (especially everyone on the high school drama team): a passionate love story, wild dance numbers, special effects, even a chorus of witches. Most importantly, the moving music that Henry Purcell created for this mythological love story creates a tale that anyone can relate to: whether you’re suffering your first heartbreak in 7th grade, or you’re a professional singer performing before an audience of thousands.”

And, to return to our opening thought from author Julian Barnes, nobody does death, and heartbreak, like Dido. To quote Classic FM, “Purcell hits the operatic jackpot in terms of a tune at the moment Dido dies. ‘When I am laid in earth’, is an aria of melancholic beauty perhaps unsurpassed in all opera.”  Carla Jablonski will be singing it in the upcoming Heartbeat production; one of my favorite versions of this searing lament in YouTubeLand is from Norwegian mezzo-soprano Marianne Beate Kielland.