Karin Weston is the recipient of the 2019 Barbara Thornton Memorial Scholarship which supported her travel to Europe in summer 2019 to study Medieval music and the Occitan language.

My summer took me across much of Western Europe – Spello, the Auvergne, Villeneuve-sur-Lot, Arezzo, Utrecht, Cologne – studying the Occitan language, the interpretation of Trecento music, Italian and French mensural notation, and medieval flute. These studies were a unique set of opportunities, ones that I could only get in Europe, and have given me a better understanding of medieval music and the medieval world.

My studies began in Spello, at the 10th Annual Course of Medieval Music with members of Micrologus. Spello is a small town on a hill in Umbria, and it seems like it could be right out of the middle ages. Being in Spello, this music felt completely in place – I was struck by how studying and performing medieval Italian music felt almost like an ethnomusicology endeavor here. In the evenings, there were often instrumental jam sessions on medieval tunes, and it was inspiring to get to hear this improvisation, imagining that this is what the instrumental music of the time would have sounded like.

What initially drew me to the course was the chance to study Trecento music with Patrizia Bovi. Among all the detailed work we did together, working with Patrizia Bovi on this music left me with two main take-aways, one that has to do with tempo and one with phrasing. Trecento music has long lines, with long melismas alternating with syllabic text settings. To find the tempo for a piece, Patrizia encouraged me to focus on sections with syllabic text-setting, to ensure that the text in these sections was not significantly faster than natural speech. This resulted in slower tempos than I had previously envisioned. The other aspect had to do with phrasing the melismas, to not phrase them into smaller sections (as I might in baroque music), but to keep a forward momentum all the way to the end of the line. Of course, we do not and cannot know how this music actually sounded at the time, but I personally found both of these points to be convincing.

After Spello, I went to the Auvergne in France to visit my colleague Sasha Zamler-Carhart at their farmhouse. Sasha speaks Occitan and sings medieval music, and was able to give me guidance on the differences between medieval and modern Occitan. Like Spello, the Auvernge also seems to be of a different time – the landscape is a picturesque combination of farms and forest, and many of the structures are from the middle ages and could have been seen by troubadours, including farmhouses, village houses, churches, even ruins of old castles. 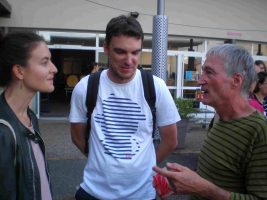 Occitan has always been a bit of a theoretical language to me, like a secret code that I was learning, and I wanted to see what it was like to hear contemporary Occitan in the wild. I attended the Escòla Occitana d’Estiu in Villeneuve-sur-Lot, and spent a week learning the basics of the Occitan language. As one would expect, pronunciation of modern Occitan differs from medieval Occitan, and in some interesting and (for me) unexpected ways – v’s are pronounced “b,” o’s without an accent are “oo,” and a’s at the end of a word are pronounced “oh” (this last one being the rule I could never quite get right). Have I mastered the Occitan language? No. But I have gained a good reading knowledge, and have a much better sense of the sound of the language. In addition to the Occitan language, I also learned about the music, dance and culture of the region. Two highlights of this course both had to do with troubadour song – one was hearing Olivier Payrat, a musician from Limousin and a native Occitan speaker, sing several troubadour songs, and the other was getting to perform a troubadour song myself for the other members of the course.

The Barbara Thornton Scholarship was generous, and I ended up having enough funds to attend another course, the Settimana Musicale del Trecento, with Kees Boeke, Claire Piganiol, Claudia Caffagni and Jill Feldman. I had attended this course two years ago, but this time around I was able to take better advantage of the course, as I have gained stronger musicianship skills and improved my vocal technique. I was also able to take more advantage of the sessions to learn Italian notation of Trecento music. I have run a mensural notation reading group in New York for the past year-and-a-half, but we have only dealt with French notation up until now. This past week, we looked at an Italian notation piece for the first time, one that I had studied previously in Arezzo, and would have not been able to figure out on my own prior to the course.

Fortunate timing allowed me to attend part of the Utrecht Early Music Festival this summer as well. Main highlights were performances by Dialogos, Le Poème Harmonique, graindelavoix, and of course ACRONYM, the only American group featured in the festival. I was also fortunate to see the Medieval/Renaissance ensemble competition, which had a variety of medieval groups – a shawm band and a flute consort, for example (one member of the flute consort, Ensemble Phaedrus, being Mara Winter, who won this award a couple years ago and who I had the chance to meet for the first time in Utrecht).

After Utrecht, I worked in Cologne with Norbert Rodenkirchen on medieval flute. I played modern flute for eight years in middle school and high school, but have not picked up a flute since. Medieval flute has been on my wish list of things to learn for a long time, and my Trobár colleague Allison Monroe has long bewailed being the only melody instrument in our ensemble. Norbert helped take me through some of the fingerings, and gave me direction for what to practice going forward. We went through a few simple medieval pieces, transposing them into different hexachords and working on intonation and phrasing. Medieval flute is a challenge for a novice, particularly the intonation, but I look forward to bringing my flute playing to a level that will allow me to play in Trobár concerts. It felt very fitting to end my trip this summer working in the very same loft where Sequentia worked in Cologne.

I am grateful for these opportunities to explore more fully Trecento music and the Occitan language, and am looking forward to applying what I learned this summer to my work with Trobár, my mensural notation meetings, and my continued work on medieval flute. Thank you to Early Music America for making my studies this summer possible! 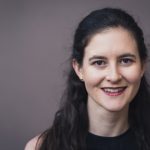 Karin Weston founded Trobár with 2017 Thornton Scholarship recipient Allison Monroe and Elena Mullins three years ago. They have performed in Cleveland, Cincinnati, Washington D.C., and New York, and have held residencies at Avaloch Farm and the University of Louisville. Karin has a MA in Historical Performance Practice from Case Western Reserve University and a BA in Molecular Biology and Music (Vocal Performance) from Scripps College.