CD REVIEW — Pierre de Manchicourt (c.1510–1564) was one of the most famous composers of his day. Born in French-speaking Flanders, he was a choirboy in nearby Arras by the age of 15, and by his mid-30s he was maître de chapelle at Tournai Cathedral. On the cusp of his 40th birthday, he became master of the chapel of Philip II of Spain, likely holding this position until his death a mere five years later. 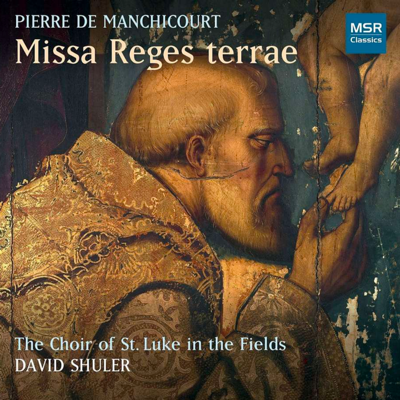 His network of associations reads like a Who’s-Who of the 16th-century musical elite. Through the immense patronage of the arts at the hands (or, rather, wallet) of Archbishop Granvelle, he was connected with well-known musicians such as Claudin de Sermisy and Tielman Susato. He would have worked alongside the likes of Jacob Clemens non Papa and Nicolas Gombert while under Philip II, and most of his works were published by Pierre Attaingnant, including a book of motets exclusively by Manchicourt. But by the end of the century, he was largely forgotten.

Unfortunately, even today Manchicourt remains a lesser-known name. In fact, this recording is the world premiere of his Missa Reges terrae, the only work on the album written during Manchicourt’s tenure with Philip II. The other five motets featured here were all composed well beforehand.

The Choir of St. Luke in the Fields has taken the rather refreshing approach of presenting the Mass in toto, instead of interspersing the other motets in between its movements. The recording starts with the source motet for the Mass, “Reges terrae,” before continuing into the Mass itself. The motets “Caro mea,” “Ne reminiscaris,” “Vidi speciosam,” and “Regina caeli,” round out the disc.

The result is a solid, even enchanting album. The beautiful open-fifth head motive of “Reges terrae” is repeated at the start of every movement of the Mass, and each time it is just slightly spine-tingling. The ensemble is beautifully blended; each independent voice part is clearly heard, allowing the imitative motives to weave seamlessly into one another and creating that sense of constant forward motion Manchicourt cultivated. The “Benedictus,” with its reduced forces, in this respect, is a tiny gem. It is clear that the Mass is the heart of the recording, both figuratively and literally, and is a much-needed addition to our discography of Renaissance music.

Yet I find the motets to be some of the most impressive polyphony I have heard recently. The central and closing cadences of “Vidi speciosum” are handled superbly, “Caro mea” is outstanding, and the slower tempo and crunchy dissonances of “Ne reminiscaris” are simply stunning. The gorgeous concluding Alleluia of “Regina caeli” is a moving end to a moving disc.

There is little to criticize here, though I would suggest that the portrayal of Philip II’s chapel and his relationship to music in the liner notes be taken with a grain of salt; the interested listener would do well to read some of Michael Noone’s or Luis Robledo’s work in tandem. Historical quibbles aside, I would be delighted to see the choir tackle the rest of Manchicourt’s music, for not only is a complete discography sorely needed, the ensemble also does his work justice.