Music is a moral law. It gives soul to the universe,
wings to the mind, flight to the imagination,
and charm and gaiety to life and to everything.
– Plato 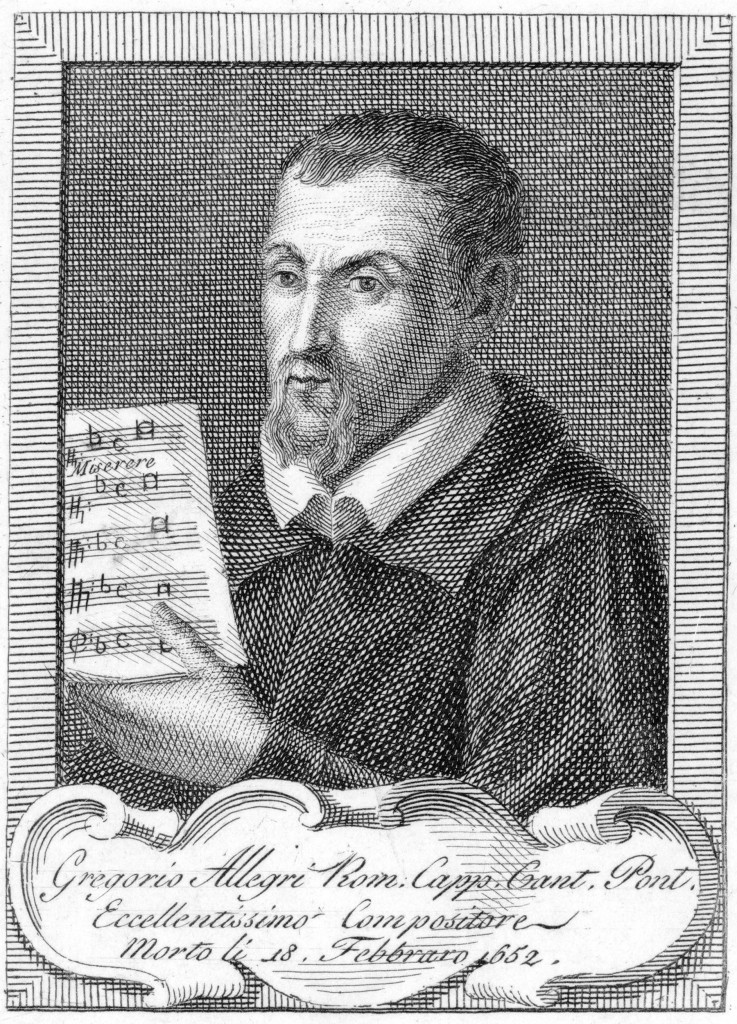 From Plato’s time to the present, some of the most magnificent music is designed to accompany occasions of solemnity, ceremony, and community. Nowhere is that more true than in the Tenebrae services of Holy Week in the Christian Faith: Maundy Thursday, Good Friday, and Holy Saturday – the days leading up to Easter Sunday.

You’re not necessarily going to find these performances listed in your handy concert calendar, but for the next few days some of the most gripping and soul-shaking music – much of it composed centuries ago – will likely be sounding in a nearby church, performed both by polished professional choirs and homespun congregations.

Gregorio Allegri’s  Miserere is arguably the most famous of all the choral masterworks written specifically for this time of year, and certainly has the most colorful history. Allegri (1582-1652) was a member of the Sistine Chapel choir in the Vatican.  His Miserere Mei Deus, based on Psalm 51, was so gripping that it was forbidden by the Holy See to be sung or published outside of the Vatican. The story goes, however, that after two hearings, the visiting child-prodigy Mozart transcribed it from memory – and for a time the piece was even attributed to Amadeus!

It’s a story that modern-day scholars have pointed out is probably apocryphal….but what remains verifiably true is that the soaring high C’s in Allegri’s magnificent creation are a moment of sublime beauty (and perhaps terror) for any soprano who dares to scale its heights!

Check out this sublime performance led by Handel & Haydn Society Music Director Harry Christophers, leading his “other” band, The Sixteen:  (And if you’ve got the time, a fascinating documentary that tells  the story behind it, courtesy of the BBC.)

Music for Holy Week doesn’t stop there, however:  Over the centuries, a number of composers have made memorable settings of the Lamentations of Jeremiah, ranging from a four-voice motet by Flemish composer Alexander Agricola (1445-1506) to Leonard Bernstein’s Jeremiah Symphony – which contains Hebrew texts in the final movement.

Perhaps the two best-known Lamentations are those by English Tudor composer Thomas Tallis (c. 1505-1585) and Giovanni Pierluigi da Palestrina (1525-1594). Palestrina, like Allegri, worked directly in the service of the Vatican in Rome, which, given the political crosswinds of the time, was never an easy relationship. The website Saturday Chorale puts it this way:

Palestrina faced a formidable task in making settings of the texts used during the rites of Holy Week he needed to write music that was moving and noble which gave full weight to the harrowing subject matter of the text but which avoided sombre monotony. Of all the obstacles he faced in the chief is the nature of the texts themselves – they are very intense, dealing as they do with grief, anger, indescribable physical agony, and spiritual suffering.

Palestrina’s Improperia (“Reproaches”) also won the papal composer considerable fame. Written for Pope Paul IV, the pontiff ordered the piece to remain in the Vatican repertoire for Holy Week, and it has ever since, as you can see in this video of a recent Good Friday performance from St. Peter’s Basilica.

As for performers on this side of the pond, on Friday the St. Ambrose Schola Cantorum, a new professional group with ties to Indiana University’s Jacobs School of Music,will present their second ever Tenebrae service at the Annunciation Catholic Church in Brazil, Indiana.  “We’re excited to get the chance to have another Tenebrae service this year,” music director Edward Atkinson told the Brazil Times. “Last year was the first one, and it was incredibly well-received. I’ve been hearing from people all year, hoping that we do another one in 2016, and that it becomes a regular part of Holy Week in the community.”

The St. Ambrose singers will present their concert programs with full translations of any Latin texts,  included in the program; the majority of the program is sung in English. Though Columbus, OH music director Robert K. Fitzgerald suggests that Latin is best. His 15-voice Schola Choir will present a Tenebrae service including both the Allegri Misere and the Tallis Lamentations, at St. Joseph Cathedral in Columbus. “It’s the language in which the composers set the music,” he tells the Columbus Dispatch,  “so any kind of English translation of these pieces is not going to be true to what the composer intended.”

In this video of Tallis’ Lamentations, you can see the Latin, English, and the actual score unfold…or you can just put on the headphones and look to the heavens…