CD REVIEW — Musica Pacifica has had an exemplary track record since its founding in 1990. With recorder player Judith Linsenberg as first among equals and a reasonably consistent personnel selected from the best West Coast early musickers, the ensemble has dependably delivered (in the words of our President-elect) “bigly” realizations of 17th- and 18th-century chamber-music repertoire at major festivals, on tour, and on disc. 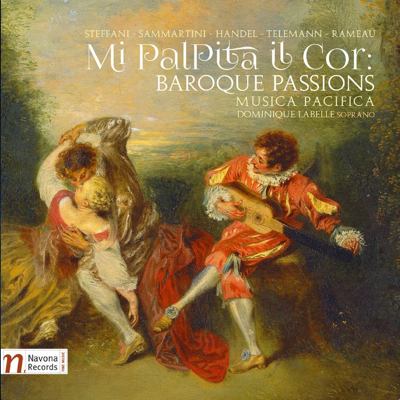 Their latest release, Mi Palpita il Cor: Baroque Passions, with soprano Dominique Labelle, gives us three cantatas set off by two instrumental interludes. The program celebrates the European Union spirit of those times (not necessarily ours) when composers traveled widely and borrowed freely from the various national styles. No artistic Brexit here, but rather a common interest in expressing human emotion.

Certain moments stand out. After a bright start with the opening movements of Agostino Steffani’s “Guardati o core” (Guard yourself, o heart), the cantata closes with an aria of resignation, “Sone i frutti d’amor” (These are the fruits of love), with Labelle’s emotional voice and Linsenberg’s warm recorder — a “voice flute” made by Jean-Luc Boudreau — entwining in sympathetic dialogue. The spare but moody Andante e Staccato from Giuseppe Sammartini’s Sonata in B Minor, Op. 1, No. 6, has violinist Elizabeth Blumenstock responding to Linsenberg’s melodic calls over the rippling guitar of John Lenti.

In Jean-Philippe Rameau’s spritely “Que du bruit de tes haute exploits” (With reports of your great exploits) from Orphée, Linsenberg’s soprano recorder (by Friedrich von Huene) and Blumenstock’s violin double in obbligato delight. And I especially liked the bouncy Gai movement in Georg Philipp Telemann’s Quatuor No. 3 in G Major, with its contrasting interlude and the spiky Polish Vite that ends the work. The continuo playing throughout is both supportive and on the mark.

I wouldn’t be the first reviewer to note the aptness of Labelle’s name and how it perfectly reflects her clear, ringing sound: vocal incandescence is wedded to a subtle sense of rhythm and oh-so-distinct elocution. Only in the fully charged fioratura of Handel’s eponymous “Mi palpita il cor” does her voice show a hint of heaviness in an atmosphere of ethereal resonance.

The notes by Steven Ledbetter are succinct and helpful, mixing general facts with illuminating details that are less well known. But the print is too small (perhaps even for the proofreader?), some pages being typeset in wide measure and printed in reverse — white on dark red. Both reading glasses and a magnifying lens may be necessary for some listeners.