Traveling With Bach: An Enthralling Experience

BOOK REVIEW — The symptoms come on suddenly: a rapid heartbeat, weakening of the knees, a constriction in the throat, and an uncontrollable watering of the eyes. These, however, are not the harbingers of a medical crisis; they are merely the side effects of a first visit to the Thomaskirche in Leipzig. One may have spent a lifetime studying, playing, or singing the music of Bach, but when you finally have the opportunity to stand where he stood and imagine hearing the first performance of the St. Matthew Passion, your relationship with Bach and his music is forever changed. 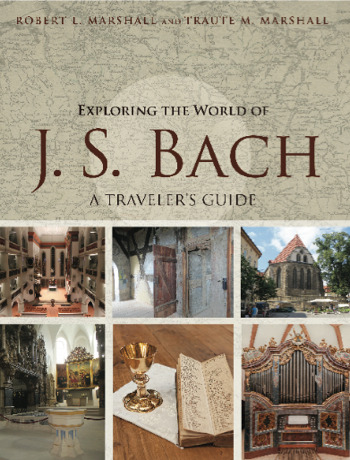 This is precisely the experience — magnified a hundred times over — that Robert and Traute Marshall have given us in Exploring the World of Bach: A Traveler’s Guide. The American Bach Society, which sponsored the volume, could not have chosen a better authorial team: Robert Marshall, whose numerous writings about Bach are infused with a rare passion, clarity, and eloquence, and Traute Marshall, a highly accomplished editor, writer, and translator. Beautifully written and lavishly illustrated, with both modern photographs and 18th-century images, Exploring the World of Bach is an invaluable guidebook for any traveler wishing to explore Bach’s Germany and Germany’s Bach.  But that is only part of the story, for indeed the accessible and engaging prose all but disguises the fact that this is also a sophisticated and original piece of scholarship (including a superb bibliography and valuable appendix), which will be of great value to both Bach experts and novices for years to come.

After a fascinating introduction that locates the reader historically, culturally, and geographically, the Marshalls dedicate a chapter to each of Bach’s principal residences in chronological order (Eisenach, Ohrdruf, Arnstadt, Lüneberg, Weimar, Köthen, and Leipzig), providing a concise but thorough grounding in their economic, architectural, and social histories, and the landscapes and cityscapes that Bach would have known. With a keen understanding of the scholarship, they explain as fully as possible how Bach, his family, and colleagues functioned within each milieu.

In the second part of the book, they consider — in alphabetical order — the 43 cities, towns, and villages that Bach “certainly or presumably visited.” Here the Marshalls prove themselves to be expert sleuths, following the tiniest clues embedded in the relatively sparse documentation about Bach’s travels. Even seemingly routine trips — such as Bach’s journey to Störmthal in 1723 to perform a cantata (BWV 197) in honor of the renovation of the church and completion of the organ — takes on new meaning when we learn that not only is the church still standing (the entire town “narrowly escaped obliteration” during the Socialist period), but also that the organ, preserved in its original state, can be heard in concerts today.

The Marshalls use surgical skill to separate fact from fiction, rumor from conjecture, all the while preserving the historical essence that triggers the reader’s imagination. It is remarkable, for instance, to learn that it would be possible to stay in the two hotels in Arnstadt that claim to have hosted the Bach family’s annual reunions. The Marshalls doubt the validity of both claims, but they nonetheless leave us with the vivid image of the Bach family gathering to eat, drink, celebrate, and, of course, play music.

This brilliant guidebook is a must for every music lover contemplating a trip to Germany, but it is also a fascinating read for Bach enthusiasts who have no intention of ever leaving their favorite armchair. By looking at Bach’s life through a geographic lens and letting us imagine the daily life of the composer in his own world, the Marshalls have made Bach that much more human, and for that we should be grateful.

Wendy Heller is the Scheide Professor of Music History and the Chair of the Department of Music at Princeton University.  She is the author of the acclaimed textbook Music in the Baroque (W.W. Norton, 2013).