CD REVIEW — The myth of Orpheus’s supernatural musical gifts and failed attempt to rescue his beloved Eurydice from Hades has served as musical inspiration from the beginnings of opera itself. Songs Of Orpheus collects arias from the late Renaissance and early Baroque written for this most unlucky-in-love lyrist by composers ranging from Giulio Caccini (1551-1618) and Claudio Monteverdi (1567-1643) ) to Tarquinio Merula (1595-1665). Caccini co-composed Euridice, considered by many to be the first surviving opera, and Monteverdi’s L’Orfeo is perhaps the best known setting of the Orpheus myth, as well as a landmark in the history of the genre. As conductor Jeannette Sorrell points out in her liner notes, the album illustrates the development from Caccini’s more static (yet nonetheless effective) style to the “more dramatic, more complex and more profound” music of Monteverdi. 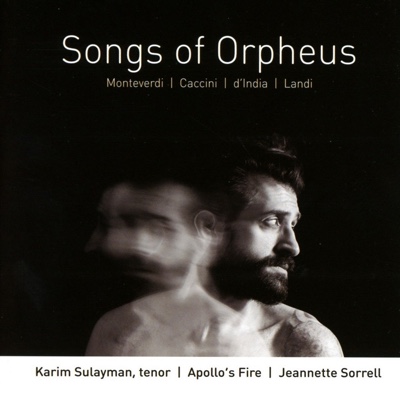 Tenor Karim Sulayman and the Cleveland-based ensemble Apollo’s Fire under Sorrell’s direction run this historical/stylistic gamut with emotional engagement and technical aplomb. Sulayman sings with a smooth, at times sweet, and above all even tone that remains balanced and poised through a variety of affects. Overt vocal inflections such as the touch of venom on an otherwise stunned “Tu se’ morta” from Monteverdi’s L’Orfeo are rare. Instead, Sulayman relies more on a keen sense of phrasing and rhythm for dramatic impact. “Funeste piaggie” from Caccini’s L’Euridice is a prime example: in free tempo over orchestral pedals, Sulayman’s flexible chant portrays a stunned Orpheus processing the loss of Eurydice before erupting at each ritornello-like exclamation of “lagrimate” (weep).

The legends don’t discuss Orpheus’s virtuosity, but Sulayman tosses in some impressive displays. The relatively short text of Sigismondo D’india’s “Piangono al pianger mio” expands into a lengthy musical reflection upon one’s misery via long runs and rapid intervals. It makes for an evocative showpiece, demonstrating both the tenor’s phenomenal sense of line and his sensitivity to the text without overstatement. The near-breathless stacks of melismata in Caccini’s “Dolcissimo sospiro” also impress without showing strain. Sulayman even gets to indulge in some humorously quick patter in Brunelli’s “Non havea Febo ancora” and practically invites the forest to get up and dance in a joyous “Vi Ricorda o boschi ombrosi” from L’Orfeo.

Instrumental works interpolated into the program help tell the story. The confused, scurrying lines of Castello’s Sonata No. 2 in D minor introduce Orpheus’s initial loss of his beloved, and the regal yet gloomy Sonata Concertata XV greets Orpheus upon his failed return from the underworld. The instrumental accompaniment even revs him up for victory (before a crushing defeat, of course) in Monteverdi’s marching ode to the lyre, “Qual honor di te sia degno.” Castello’s piece is taken from the Sonate concertate in stile moderno, i.e. in modern style, highlighting here and elsewhere the growth of instrumental forms and the busy, ornate Italian style now almost synonymous with this era.

The recording at St. Paul’s Episcopal Church in Cleveland Heights, OH, is close-up and personal, letting the listener hear inhalations and sliding strings, making for a slightly visceral acoustic that contrasts well with the musicians’ restrained yet effective approach. The overall effect is of listening closely to a person nobly in touch with their emotions rather than a character tossed around by their feelings. Poor Orpheus may never get the girl, but at least his sorrow makes music like this possible.