BOOK REVIEW — The American bicentennial celebrations of 1976 included historical reenactments of revolutionary battles, tea parties, and Paul Revere’s ride; fife and drum parades playing Yankee Doodle Dandy over and over; fireworks almost every evening; and a July 4th concert by the Boston Pops on the Charles River Esplanade that drew more than a half-million people. 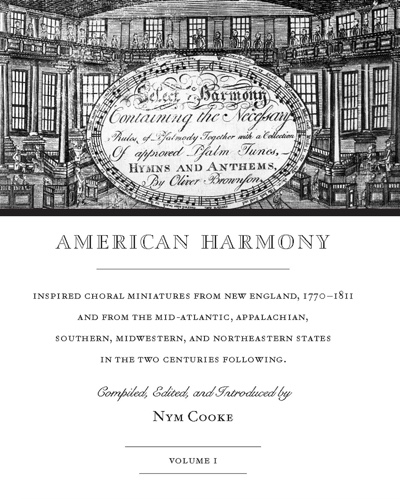 There was also an earnest effort to celebrate our nation’s early music, though this was a challenge because most it, other than that written by some Moravians and a few others, was not very good. Just how many times can you play James Hewitt’s “The Battle of Trenton,” the “military sonata dedicated to General Washington,” before the performer and audience scream “no more drum rolls in the left hand!” Some enterprising people did find a clever way around this conundrum by playing European music, like Mozart and Haydn, found in the libraries of our founding fathers.

A large repertoire, however, attracted a good deal of attention and admiration during this time, and deservedly so: the “shapenote” choral music written by composers such as William Billings, Supply Belcher (dubbed in 1796 “the Handell of Maine at the time), and many others. This, I said to myself, is music not only of historical importance, but also of musical interest — and I have remained a fan ever since. It is therefore welcome news that David R. Godine has published Nym Cooke’s magisterial study of this repertoire, and in such an elegantly engraved and handsome boxed set.

Volume One is subtitled “New England Fuging Tunes, Plain Tunes, Anthems, Set Pieces, Elegies, and Patriotic Songs, 1770-1815.” Volume Two, “Fuging Tunes, Plain Tunes, and Set Pieces from Mid-Atlantic, Appalachian, Southern, Midwestern and Northeastern States, 1813-2008,” contains “fifty-two pieces composed from 1810 through the early 2000s” in these locations. In the introduction, Cooke tells us that this book, which he began in 1975, “grew out of my love for the choral music written in New England between 1770 and 1810. In those years some 230 American composers crafted about 5,000 musical setting of religious texts.” He adds, without exaggeration, that the book’s “176 musical compositions…represent ‘the cream of the crop’ among all the thousands of works composed in the tradition over a span of more than two centuries.”

The introduction also contains sections on content, structure, historical background, and performance. Here we learn that “Congregational singing was an essential part of worship in the Protestant American colonies from the time of the first settlement,” and are guided by the editor through its history, tracing the development of singing schools, the emergence of composing singing masters, the formation of church choirs, the gradual adoption of small gallery orchestras accompanying the singing, and the improvement in musical quality, which must have been quite low, at least in the early days. In 1721, for example, Thomas Walter, a New England minister, described the music making as “miserably confused and disorderly noises.”

Of immeasurable value is the section on performance, in which Cooke describes and explains the notation of shape notes and other systems used in tunebooks with great clarity and expertise. The book is also rich in illustrations and images, printed in large and clear format. These include pictures of “gravestones of notable figures in this movement; New England meetinghouses; and frontispieces or first pages of noted publications.” The frontispiece of Billings’ The New-England Psalm-Singer is particularly noteworthy: it was engraved by none other than Paul Revere. There are other facsimiles of original publications, poems with titles such as “To the Memory of a young Commander slain in a Battle with the Indians, 1724,” and portraits of notable figures like Supply Belcher and Isaac Watts.

The two-volume set concludes with a wealth of commentary and information, including “biographical sketches of all the known composers and arrangers of the music.” These can be quite juicy. For example, we learn here that the Reverend William Bentley of Salem, MA, upon learning of the death of Billings, wrote in his diary that “he may justly be considered as the father of our New England music,” although he adds that “he was a singular man of moderate size, short of one leg, with one eye, without any address, & with an uncommon negligence of person…He died poor & neglected & perhaps did too much neglect himself.” Add to this the description by 20th-century biographers that Billings looked “like an oaf…snuffed fistfuls of tobacco…was a street-cleaner,” and you get quite a vivid image of the man.

An added bonus to these two volumes is a companion CD with fine performances of 35 tunes. Listen to it, or better yet, sing the tunes yourself or with friends, but read the book before you do. It is well worth it.

Mark Kroll is recording the complete pièces de clavecin of François Couperin for Centaur Records. He is the editor of The Cambridge Companion to the Harpsichord, scheduled to be published at the end of this year.