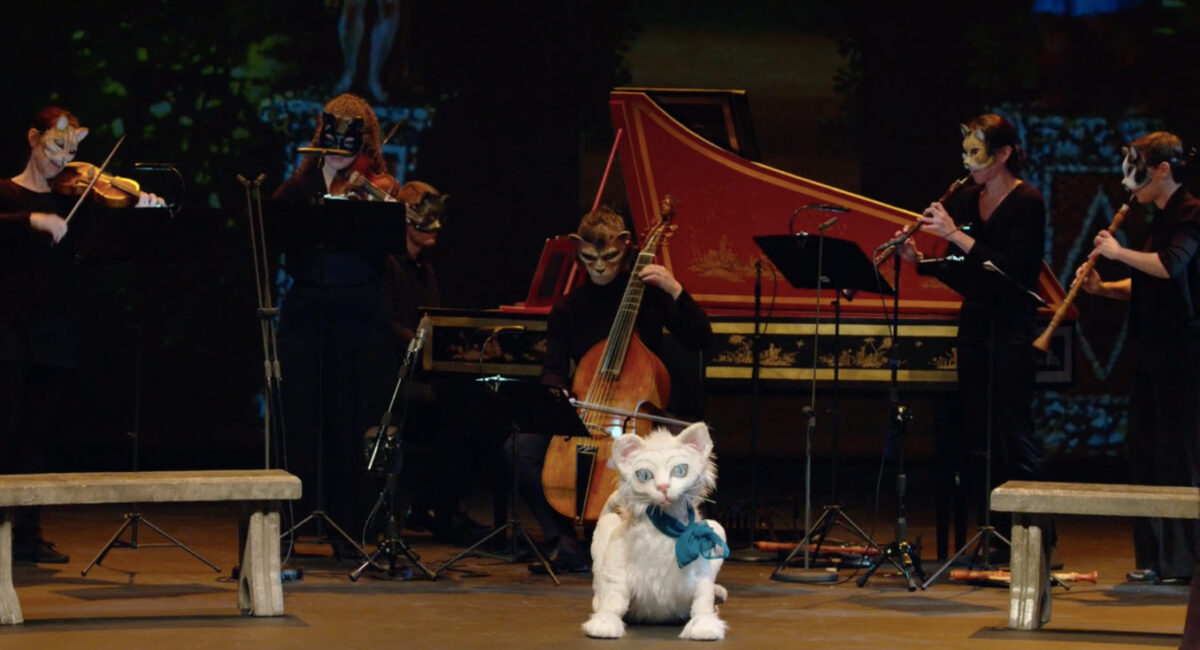 Fairy tales may seem like an unlikely source for a tragédie lyrique. But Les Délices’ new production of The White Cat combines the two genres with arresting results.

As the Cleveland-based ensemble’s debut operatic endeavor, The White Cat weaves a tale about the virtues of friendship, loyalty, and love through a pastiche of French Baroque favorites. Their colorful new production, available for rental streaming on MarqueeTV until June 30, reveals the intimate, if antipodal, beauties of period opera and contemporary pantomime.

This tight, hour-long drama offers a musical feast. The score—prepared by Les Délices’ artistic director Debra Nagy—threads together arias by Lully, Charpentier, and Marais with incidental music taken from François Couperin’s Apotheosis of Lully. The White Cat ends in a delightfully buoyant passacaille from Lully’s Armide.

The opera’s jukebox quality complements Madame d’Aulnoy’s warm-hearted literary fable, published in 1698, as a feminist answer to the mischievous Puss in Boots. D’Aulnoy was the first to describe her stories as contes des fées, fairy tales.

In Larry Rosenwald’s streamlined, English-language libretto, the Prince is tasked by his father, the King, with finding several items on an increasingly more complicated list. He finds them all in the mysterious White Cat’s domain. When he meets the magical feline, he is immediately struck by her affectionate personality. Longing for companionship over duty, the Prince stays with the White Cat for a year each time, trading tales and lounging in her lush garden.

Yet the King’s final request—to find a wife—requires an unlikely sacrifice. At the White Cat’s inexplicable insistence, the Prince obeys her command and beheads her. Her spirit is preserved in a magic orb, which the heartbroken Prince presents to the King. When it shatters, the White Cat transforms into a beautiful woman and promises to marry the Prince. It turns out that she’s also very rich, reigning over large tracts of land—enough space for everyone to live happily ever after. (The “animal-bride” plot, widespread in folktales globally, is a classification in the scholarly ATU folklore index.)

Cynics may balk at the idea of unfaltering kindness winning over everything. But Rosenwald’s polished libretto makes a charming narrative about the power of generosity, which is sensitively rendered by the performers.

Tenor Jason McStoots makes an avuncular Prince, throughout revealing the character’s deep desire for kinship and love. His honey-toned singing conveys the tender feelings for his animal companion. As the White Cat, soprano (and puppeteer) Elena Mullins sings with a bright resonance that captures the tension between friendship and the urging need for her beloved to fulfill his task.

Both singers find a joyful exuberance in their duets while shaping each phrase with period-appropriate mordents and trills. Other arias convey poignant sorrow. The dark tones of “Ah, ’tis time” capture the two in a painful moment after the Prince announces he must return home.

Orchestral dances, played with zest and precision by Les Délices, bring additional pathos to this mostly happy tale. Driving rhythms convey the White Cat’s restlessness as she awaits the Prince’s return. Through it all, the musicians handle the patchwork score with both lilting vitality and lyricism.

McStoots, who is also stage director, keeps the minimal action moving swiftly. Puppeteer Ian Petroni portrays the much-larger-than-life King with humor and grace. Through elegant motions and dance, Mullins and puppeteer Samara Steele capture the movements of the White Cat with feline agility. The orchestra is also part of each scene. Players interact with the puppet cat as it jumps on the harpsichord and playfully bats at their bows. 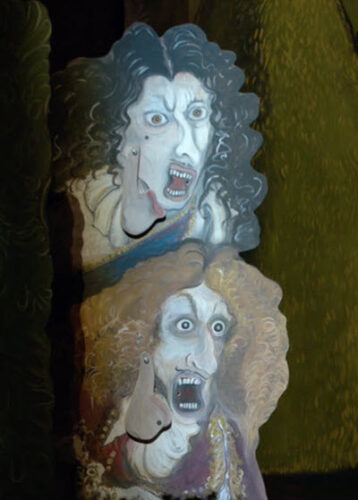 A pair of gossiping courtiers react with mouths agape as this incredible tale unfolds.

Performed with flair, The White Cat makes a wonderful all-ages introduction to two genres that share a unique power to relay timeless stories.

Aaron Keebaugh has written for The Musical Times, Corymbus, and the Classical Review, for which he serves as regular Boston Critic. A musicologist, he teaches at North Shore Community College in Danvers, Mass.