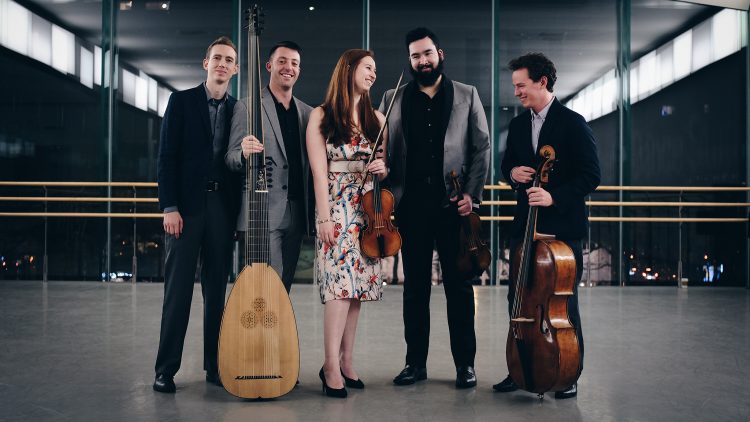 Voyage Sonique is a period ensemble devoted to the historical performance of baroque music, with a focus on French repertoire. The founding members met during their studies at The Juilliard School, forming the ensemble after discovering a tight-knit friendship and united passion and playing styles. As individual musicians, each enjoys a flourishing solo and chamber career: Jeffrey Girton recently gave his solo Lincoln Center debut with Tomasini’s Violin Concerto; Augusta McKay Lodge celebrates her debut solo album’s April 2018 release on the Naxos label and together with Keiran Campbell gave her Carnegie Hall debut; Keiran recently performed with Tafelmusik Baroque Orchestra in their 2017 season and is a renowned modern and baroque cellist; Robert Warner has performed with conductors such as Masaaki Suzuki, Kristian Bezuidenhout, and Ton Koopman; and Adam Cockerham pursues a busy career in New York and on the West Coast with ensembles such as Trinity Baroque Orchestra and Philharmonia Chamber Players and can be found on an album with soprano Danielle Sampson.

In their first season as an ensemble, Voyage Sonique has already experienced a promising start and looks forward to a full year of concerts including a program with GEMS (Gotham Early Music Scene, Inc.) on their Midtown Concert Series.

Voyage Sonique will present a varied program of French Baroque instrumental music, from the mid-seventeenth through the mid-eighteenth centuries. The program delights with two pieces by well-known composer François Couperin, whose 350th birthday we celebrate this year. Other works on the program include a wild virtuosic trio sonata of Jean-Marie Leclair and a delightful chaconne of Marin Marais, taken from his opera Semele (arranged by Augusta McKay Lodge).