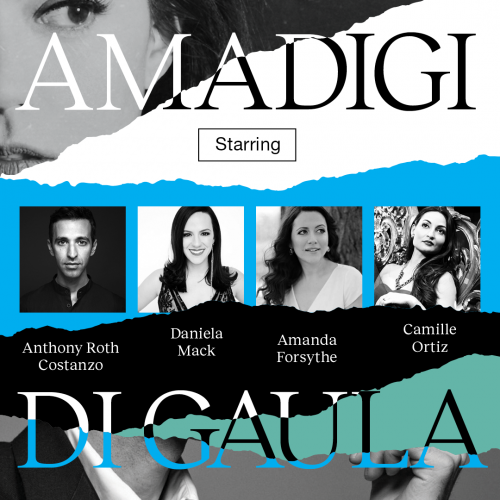 Boston Baroque’s 2021-2022 season returns to the much-anticipated annual staged opera with performances of Handel’s rarely-heard Amadigi di Gaula. Performances will take place on Thursday, April 21 at 7:30pm, Friday, April 22 at 7:30pm, and Sunday, April 24 at 3pm at GBH’s Calderwood Studio, and the 7:30pm performance on April 22nd will be livestreamed on the global streaming platform IDAGIO.

“Although it is one of Handel’s spectacular ‘magic’ operas, Amadigi is at its heart an exquisitely intimate story about the value of humility and kindness and the redemptive power of forgiveness,” says stage director Louisa Muller. “Boston Baroque’s approach to a new production of a first-rate rarity in a non-traditional theatrical space, experimenting with a hybrid model of live audience and streaming, is so exciting, and makes me grateful to be part of Boston Baroque’s bold plans for the future.”

Amadigi di Gaula is Boston Baroque’s first co-production with Philharmonia Baroque Orchestra & Chorale, a period instrument orchestra based in San Francisco. “Co-productions are commonplace for opera companies but a relative rarity in early music,” Boston Baroque’s Executive Director Jennifer Ritvo Hughes shares. “They extend the reach of a program. So much love and thought goes into developing a production; it’s gratifying for all involved to see it have a long and varied life. Amadigi di Gaula will have three performances in Boston, be livestreamed and available on-demand through IDAGIO, and then have three performances a year later in San Francisco. All of us at Boston Baroque are thrilled to be partnering with Philharmonia Baroque Orchestra on this collaboration.”

Both in-person and livestream tickets are available for purchase online at baroque.boston or by calling the Box Office at (617) 987-8600. Livestream tickets begin at $9, and in-person tickets range from $25-$175. Both performances will also be available to stream on-demand 30 days after the live air date, with on-demand rentals beginning at $9. Safety remains a top priority for both musicians and audience members, with all in-person audiences required to show proof of vaccination against COVID-19. Masks will be required at all times while indoors at GBH.

The six-time GRAMMY®-nominated Boston Baroque is the first permanent Baroque orchestra established in North America and, according to Fanfare Magazine, is widely regarded as “one of the world’s premier period instrument bands.” The ensemble produces lively, emotionally charged, groundbreaking performances of Baroque and Classical works for today’s audiences performed on instruments and using performance techniques that reflect the eras in which the music was composed.

Boston Baroque has expanded its reach globally through its partnership with IDAGIO, the world’s leading classical music streaming service. Its 2021-2022 Season was the first full season by a Baroque orchestra to stream on the platform, and brought together virtual audiences from across five continents (North America, South America, Asia, Europe, and Australia) and over 15 countries.

Founded in 1973 as “Banchetto Musicale” by Music Director Martin Pearlman, Boston Baroque’s orchestra is composed of some of the finest period instrument players in the United States, and is frequently joined by the ensemble’s professional chorus and by world-class instrumental and vocal soloists from around the globe. The ensemble has performed at major music centers across the United States and performed recently in Poland for the 2015 Beethoven Festival, with sold-out performances of Monteverdi’s Vespers of 1610 in Warsaw and Handel’s Messiah in Katowice.

Boston Baroque reaches an international audience with its twenty-five acclaimed recordings. In 2012, the ensemble became the first American orchestra to record with the highly-regarded UK audiophile label Linn Records, and its release of The Creation received great critical acclaim. In April 2014, the orchestra recorded Monteverdi’s rarely performed opera, Il Ritorno d’Ulisse in patria, which was released on Linn Records and received two nominations at the 2016 GRAMMY® Awards.