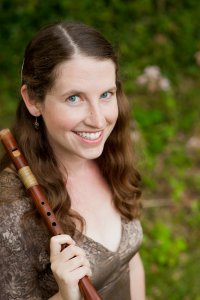 "Preturnaturally persuasive" (The Ann Arbor Observer), Anne Timberlake has appeared across the United States performing repertoire from Bach to twenty-first-century premieres to Celtic tunes. She holds degrees in recorder performance from Oberlin Conservatory, where she studied with Alison Melville, and Indiana University, where she studied with Eva Legene and won the 2007 Early Music Institute Concerto Competition. Critics have praised her "fine technique and stylishness," "unexpectedly rich lyricism" (Letter V), and "dazzling playing" (Chicago Classical Review).

Anne has received awards from the American Recorder Society and the National Foundation for the Advancement of the Arts, and was awarded a Fulbright Grant to study recorder performance in Belgium. With Musik Ekklesia, Anne has recorded for the Sono Luminus label.

Anne is a founding member of the ensemble Wayward Sisters, specializing in music of the early baroque. In 2011, Wayward Sisters won Early Music America's Naxos Recording Competition and released its debut CD on the Naxos label in 2014.