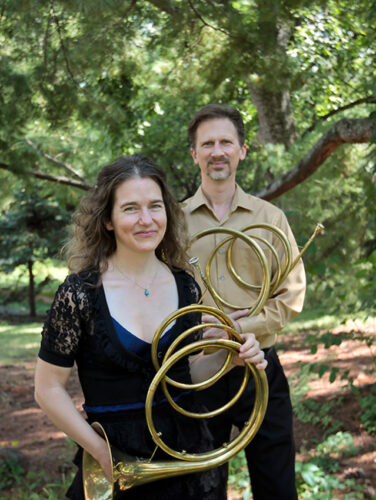 Mountainside Baroque will launch its eleventh full season of concerts on September 24 and September 25 with a two-performance festive weekend introducing the season’s theme–Chapels and Courts: Touring Musical Baroque Europe. Patrons are encouraged to come for the entire weekend, taking in the concerts as well as the many other activities available in the tri-state area.

Mountainside has also scheduled performances for November, March, and a second two-concert weekend in April. As is the Mountainside custom, performances will be preceded by informative talks designed to enhance enjoyment of this timeless music, to begin about one-half hour before the concert.  In addition to these concerts, the popular annual LESSONS AND CAROLS service will take place in December.

Festive Weekend #1 begins on Saturday, September 24, at 7:30 PM at the Allegany Arts Council with AROUND THE HORN | THE FRENCH HORN THROUGH THE AGES.  Hailing from North Carolina, performers Chris Caudill and Rachel Niketopoulos will lead us on the musical journey of the horn, from the hunting horn through the ages. They will also be heard performing the following day, in Sunday’s concert.

On Sunday, September 25, GEMS FROM BAROQUE DRESDEN | FLORENCE ON THE ELBE at 4 PM at The Shrine of Ss. Peter and Paul (Cumberland) visits the Hofkapelle in Dresden, one of the most lavishly endowed courts in Europe, boasting a roster of musicians and artists that would have been the envy of any court in Europe. The large orchestra, led by violin virtuoso, Georg Pisendel, was especially famous, and drew composers such as Vivaldi and Telemann to write concerti specifically for him at Dresden. Violinist Cynthia Roberts will lead the full Baroque orchestra. Other soloists will be Rodrigo Tarraza, Baroque flute, and Chris Caudill and Rachel Niketopoulos on natural horn.

The season continues on Sunday, November 13 at 4 PM at The Allegany Museum (Cumberland) with GATHER YE ROSEBUDS | MUSIC FROM THE CHAPEL ROYAL. This exploration of the early 17th century music composed by composers such as Nicolaus Lanier, and William and Henry Lawes will include Lanier’s famous Lament “Hero and Leander” as well as Lawes’ cautionary song “Gather ye Rosebuds Whilst You May.” Instrumental works from the Royal Masques and one of the Lawes Harp Consorts will be highlights.

A FESTIVAL OF LESSONS AND CAROLS | FAVORITES OLD AND NEW, on Sunday, December 18 at 5 PM at Emmanuel Episcopal Church (Cumberland), is Mountainside Baroque’s annual gift to the community. Featuring the Scholars of St. Cecilia, Mountainside Baroque’s resident chamber choir, the celebration encompasses six centuries of Christmas music, including traditional carols, along with readings by local clergy and officials. Mountainside Co-Artistic Directors Ryan Mullaney and Lyle Nordstrom will lead The Scholars. This favorite holiday tradition is not a ticketed event, but donations will be welcomed!

In 2023, Mountainside will return on Sunday, March 26 at 4 PM at The Shrine of Ss. Peter and Paul (Cumberland) with CARISSIMI’S ROME | MUSIC FROM THE ETERNAL CITY. Carissimi, the most famous composer from the middle of the seventeenth century, produced both chamber music for the self-exiled Queen Cristina and the Collegio Germanico, a school for Catholic priests and cantors in Rome. The well-known musicians and composers who were trained or employed at the Collegio included Victoria in the sixteenth century and Giovanni Sances in the seventeenth. The attached church of Sant’Apollinare saw the premieres of several of Carissimi’s oratorios, including his famous “Jonah and the Whale,” to be presented on this concert.

The season will round out with Festive Weekend #2, beginning on Saturday, April 22, at 7:30 PM at Clatter Cafe with a change of pace for Mountainside Baroque–CATCH OF THE DAY | PURCELL’S PUB. Baroque England not only gave birth to wonderful music for the courts and chapels, but also numerous rowdy catches, rounds and glees that were part of the pub scene, often frequented by Purcell and many musicians.

Purcell will make another appearance on Sunday, April 23 at 4 PM at St. Paul’s Lutheran Church (Cumberland) with HARK HOW THE SONGSTERS | PURCELL’S BRILLIANT FAVORITES. After the Puritan suppression of Oliver Cromwell’s regime, the restoration of Charles II inspired a renaissance of English music for the court, churches and theaters, especially under Henry Purcell, John Blow and others. The Baroque trumpet will star in both the instrumental and choral music on this performance.

Directed by Ryan Mullaney and Lyle Nordstrom, Mountainside Baroque has brought the engaging music of the Baroque, Renaissance and Classic eras to Cumberland through performances by fine musicians from across the country–concerts that rival those heard at the nation’s major cities. Audiences have consistently grown in number, a testament to the interest of music lovers in Western Maryland.

COVID 19 Guidelines: We ask our patrons to check the Mountainside Baroque website before attending any concert to obtain the latest information on COVID 19 safety protocols. The organization follows CDC guidance regarding community levels of Covid 19. The current status includes recommendations for masking indoors. We encourage patrons to be up to date with vaccinations as well for the protection of all.

Tickets, including special FlexSaver booklets (six tickets for the price of five), can be purchased in advance at mountainsidebaroque.org, or at the door on the day of the concert. Consult the website for additional performance details and updated program information.