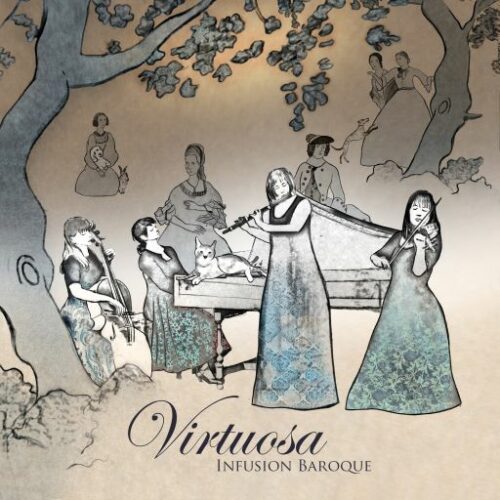 “Women musicians were not recognized as professionals, despite their education and capabilities surpassing many of their male colleagues, brothers, and husbands”
– Sallynee Amawat

An in-depth booklet and companion website display stories and artwork surrounding the women featured on the recording. The goal of the Virtuosa Project is to provide cultural and socio-economic context for the women’s lives, the music they wrote, and to highlight their accomplishments in a time saturated with adversity. As the members of Infusion Baroque delved deeper into the stories of the composers, they began to form a shared admiration for the depth of perseverance and passion they encountered.

Virtuosa is the culmination of many shared frustrations and conversations between the members of Infusion Baroque. “One of the most poignant thoughts brought about by Infusion Baroque’s Virtuosa Project exploration is that, had I been born during the time that the music on this album was composed, I would not have been allowed to play the flute”, says flutist Alexa Raine-Wright.
Underneath the Virtuosa Project umbrella is a web series dedicated to four women across the 18th and 19th centuries: Princess Anna Amalia of Prussia, Lise Cristiani, Teresa Milanollo, and Élisabeth-Claude Jacquet de La Guerre. Each composer is profiled in a mini-documentary, and accompanied by a companion video in which a piece written by or composed for the featured musician is performed. Each of the women featured is recognized as a pioneer in their field. There are also four pieces from four different male composers on the album, all of whom have in some way contributed to or supported the cause of women musicians during their time.