Music for the next generation 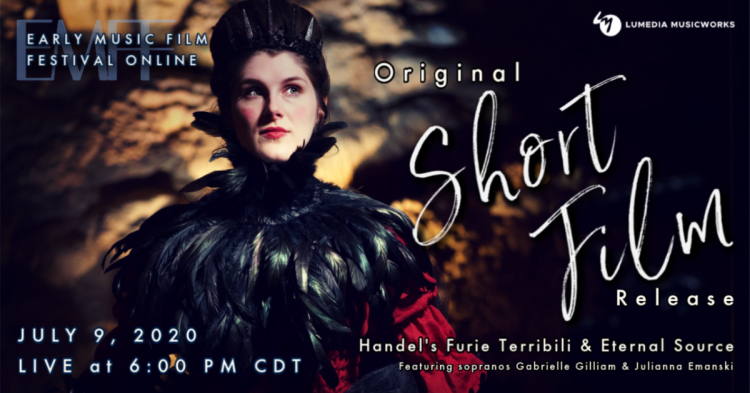 WHO?
The Dallas-based ensemble Lumedia Musicworks  is run by three diversely talented and experienced women who met at the University of North Texas College of Music – Dr. Julianna Emanski Kim, Stephanie Noori, and Eliza Smith. These young women are passionate about reimagining the meaning and purpose of music for the next generation.
WHAT?
This week Lumedia Musicworks is hosting the first ever Early Music Film Festival (EMFF) online – a live- streamed event daily July 5 – 9 at 6pm CDT. This event is basically a marathon film festival featuring special effects and high drama with the ultimate soundtrack, complete with glamorous emcee, cocktails, and entertainment. On July 9th, the festival culminates in the premiere of  Lumedia’s 6th short film, and the announcement of the Early Music Short Film Competition Winner $$$.
WHERE?
You can watch on Facebook, Youtube, or Lumedia Musicworks website homepage.
WHEN?
At your convenience, but the fun is in the interaction – so join us live at 6pm CDT daily from July 5 – a premiere film release event on July 9th.
WHY?
Lumedia assists audiences in discovery and exploration of the newest multi-media art form in Early Music. Lumedia Musicworks sees this time as an opportune moment of which to take advantage. It is time to think PYSCHO-logically. Lumedia has been inventing an entirely new crossover genre with their own films since 2017. The film festival is an extension of the organization’s ethos in already-prepared work.
This Thursday, July 3,  Lumedia will go live at 6pm CDT for Best New Work category. Then,  starting on Sunday, July 5,  they replay past EMFF livestreams leading up to the premiere release and winner announcement on July 9.