As Pants The Hart, As Ends The Month!

Two years in, and twice the fun! On this final day of March, we’d like to offer a lion-sized salute to the more than 260 partners, (double the number from 2016!), presenting nearly 100 concerts and events across North America during the (take your pick) wintry, blustery, sunny, windy, cloudy, rainy, and possibly spring-like month of March, now a.k.a. Early Music Month.

March – birthdays of Baroque giants J.S. Bach, Antonio Vivaldi, and Georg Philipp Telemann, as well as the “high season” of musical expressions of Lent and Easter – seemed as good a month as any to demonstrate just how much of a force Early Music has become in the larger music community – in our schools, our concert halls, among amateur and professional players alike, not to mention presenters, scholars, and even luthiers and artisans seeking to, as EMA says, “replicate, create, and understand the values and visions of an earlier era as expressed through its music and its instruments.”

Our final post of the month may illustrate just how large that larger music early music community has grown.

Sure, there have been performances a plenty in such Early Music hotspots as Boston, New York, San Francisco, Seattle, Montreal, Washington, D.C., and Toronto, but how about Falmouth, (population 11,185), Maine?

Falmouth is home to St. Mary Schola, a professional early music band, made up of, – in their words – “northern New England’s finest singers and accompanying instrumentalists, devoted to the performance of masterworks from the Medieval, Renaissance and Baroque eras.”

Tonight, SMS, based at St. Mary the Virgin Episcopal Church in Falmouth, presents the first of three concerts that illustrate the endless fascination and appeal of Early Music in modern times. It’s called “As Pants The Hart..” If you know your English hymns, you may recognize the verse:

As pants the hart for cooling streams

When heated in the chase,

So longs my soul, O God, for Thee,

And Thy refreshing grace. 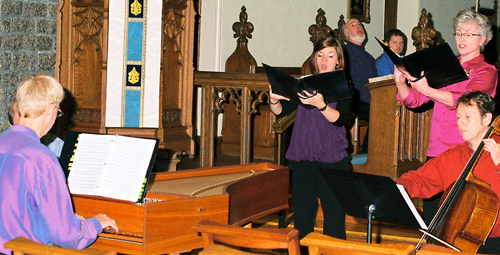 This sturdy Anglican hymn has been set to music dozens of times, but none more thoroughly and famously than by a composer for whom English was a third language: none other than George Friedrich Handel, whom scholars have now figured out set “As Pants” (okay, it feels a little funny to write that) no fewer than five times.

Those five instances also help to trace Handel’s evolving role in society. In 1713, “As pants the hart” was the very first English-language anthem he set for Queen Anne, who had just rewarded him with an £200 annual pension (worth about $40K today) as a composer for the Chapel Royal. Four years later, with Anne gone and his fellow German George I on the throne, Handel blew up the humble Psalm 42 text into a full-blown 20 minute, seven-part composition, replete with an overture, arias, duos, trios, and a final glorious chorus.

That’s the version our friends in Maine will perform tonight at the Cathedral of the Immaculate Conception in Portland, with subsequent concerts in Falmouth and Portland on April 2 and 4. On this evening, however, there will be a symmetrical opening: In addition to this timeless setting of Psalm 42, the concert will begin with Bach’s Cantata No. 42, Am Abend aber desselbigen Sabbats  – “On the evening, however, of the same Sabbath.”  And in between: A quartet of Renaissance heavyweights: Dufay, Palestrina, Orlando De Lassus, and Gesualdo. Viva Bach, Handel, and Early Music Month, as well as the final line of “As Pants The Hart’s…” final line: Thy health’s eternal spring!

Benjamin K. Roe is the Executive Director of the the Heifetz International Music Institute. Before joining the Heifetz Institute, Ben was the Managing Producer for Music and Performance at WGBH, Boston. He has also served as the General Manager of WDAV 89.9 FM in Davidson North Carolina and worked for 20 years at NPR, in Washington, DC, where he served in a variety of roles, including Director of Music and Music Initiatives. Ben currently serves as the Artistic Director of the “Music and Museum” series at the Bechtler Museum of Modern Art in Charlotte, NC, and is a frequent guest lecturer, adjudicator, and pre-concert speaker.