J. S. Bach’s unaccompanied cello suites need little introduction. Likely composed during his Cöthen period and popularized starting in the 1930s by Pablo Casals, BWV 1007–1012 are now established as some of the most exemplary and challenging music for the cello. They’re also widely regarded as a pinnacle of musical profundity. Just mentioning these works often leads to mentions of communion with God. 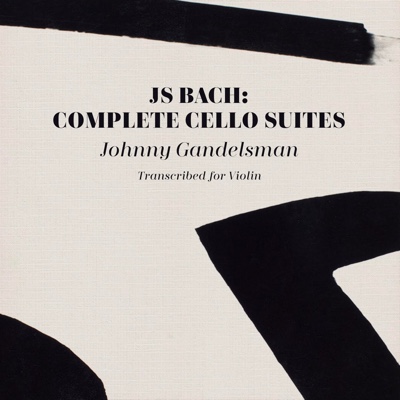 It’s no wonder that playing these pieces on other instruments inspires discussion and even debate. Critics point to a loss of facility and idiomatic sound in transcriptions, and especially to a supposed loss of gravitas on treble clef instruments. Yet Bach himself was quite comfortable with adapting his music to different instruments. Even if they don’t reach the lower octaves, these voices can reveal their own depth of expression.

Johnny Gandelsman takes these secularly composed, now sacredly received works higher in pitch — transposing all but the last suite up a fifth to perform on violin — while keeping the music refreshingly down to Earth. The profundity and pathos are still there: The ubiquitous first Prelude still resounds in waves of calm, strong sixteenth notes over a tonic undertow, with its familiar drive in glowing tones that stretch out into sweetly touching asides.

The Russian-born and New York-based violinist works in a range of classical styles, including contemporary commissions with his Brooklyn Rider string quartet. He also performs world music with Yo-Yo Ma’s Silkroad Ensemble and appears with jazz and popular musicians,  including Bono and Béla Fleck. His curiosity clearly inspires the sense of experimentation and sheer energy heard here. Yet historically informed performance guides him in terms of spare vibrato, vibrant timbre, uncluttered delivery, and tempos. A listener lucky enough to come to this music with no historical or cultural baggage might hear the fourth Gigue as an elegantly upbeat, confidently unfurled folk reel.

Gandelsman’s impressive technique serves rather than dictates interpretation. The fifth Prelude slices through with directness and clarity of a full throttle improvisation. The plaintive second Prelude takes on the air of an instrumental lament a la Locatelli. Compared with Rachel Podger’s slightly rounder, at times breezy (but still wonderful) album of the cello suites on violin, Gandelsman prioritizes the violin’s incisive qualities and rhythmic pop.

Moderate and up-tempo dances are often quick, but Gandelsman choreographs each distinct rhythm and gives each movement its own unique feel. For the third Bourrée, he calls the dance with plush tone in tight strokes and a tempo that would leave dancers just short of breathless. The succeeding Gigue takes pleasure in tiring them out once and for all. Nimble accelerations and robust attack give the fifth Allemande a ravishing, tango-like intensity contrasted with more introspective accents.

Slow, stately sarabandes find Gandelsman stretching out into rhapsodic statements. The second Sarabande hints at the recurring ground beat, but the emphasis is on phrases unfolding into perfectly even and evocative trills and doleful descents. In the fifth suite, with its jangly scordatura tuning, the Sarabande becomes a lonesome, desiccated exploration that would fit right in at a modern setting.

Gandelsman plays a warm, fluid, but not excessively bright 2008 Samuel Zygmuntowicz violin for most of the program. In the sixth suite, which scholars believe Bach intended for a five-string piccolo cello, Gandelsman plays a 2018 five-string Snow violin (made by Chinese luthier Xueping Hu, whose first name translates to Snow) with an especially juicy texture. This is the first recording of the sixth suite on a five-string violin. It sounds tailormade for Gandelsman’s revving triplets in the Prelude and tumbling slurred sixteenths in the Courante.

The final suite is considered the most difficult of the set, but Gandelsman really sounds like he is enjoying himself here — even as he continues to take this austere music seriously. The Courante has some downright ecstatic soprano lines toward the end, like a high-five to his instrument for doing Bach’s hallowed cello works justice. This recording might not put an end to arguments about instrumentation, but it’s a good reason not to care.

Andrew J. Sammut has written about Baroque music and hot jazz for All About Jazz, Boston Classical Review, The Boston Musical Intelligencer, Early Music America, the IAJRC Journal, and his own blog. He also works as a freelance copyeditor and writer and lives in Cambridge, MA, with his wife and dog.