No composer should be happier than Johannes Brahms with attempts to present his music in historical terms. As the conductor of the Vienna Singakademie, he programmed Giovanni Gabrieli, Heinrich Schütz, and J. S. Bach, and he actively took part in the editing and publication of works of Couperin and Palestrina and other Renaissance masters. He favored the natural horn in an era when use of the valved horn was becoming widespread. 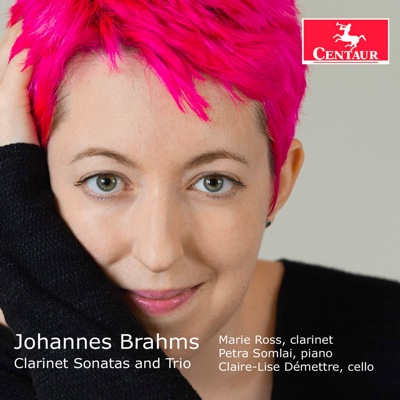 So his soul should be pleased with this recording of these works featuring clarinet: Sonata in F Minor, Op. 120, No. 1; Sonata in E-flat Major, Op. 120, No. 2; and the Trio for Clarinet, Cello, and Piano, Op. 114. In an effort to capture the Brahms style, Marie Ross uses two clarinets made by Oskar Oehler and fitted with historical reeds by Georg Kühner; the clarinetist Richard Mühlfeld, who premiered these pieces, recommended Oehler instruments. Petra Somlai’s piano is an 1875 New York Steinway of the kind Brahms requested on tour. The cello in the trio, outfitted with gut strings, is played by Claire-Lise Démettre with liberal use of portamento and a reticence of vibrato.

The notes by Ross demonstrate her careful study of the composer’s notational markings and their interpretation. Reflecting Fanny Davis’s in-person memories of Brahms performances, she points out the need for an “elasticity” of tempo without which the music of Brahms loses much. Ross cites his diamond-shaped “hairpin” markings as indicating a change not only in volume but also in speed, and says that “it would have been standard to speed up with the crescendo and slow down with the diminuendo.” But Davis remembered Brahms “visibly expanding over a diamond-shaped phrase” and thought this kind of marking was used “to express great sincerity and warmth.” This suggests a broadening, not a hastening, of tempo and reminds me of witnessing a recording session of Liszt songs in which a tenor of radiant voice and great lung capacity wanted his pianist to hold back the tempo of a long, excited phrase over which he sailed his climactic high note.

The notes also introduce the principle of “dislocation, or simply put: not playing together for expressive purposes.” But listeners should not worry about any musical disfigurement. In the end, it’s a matter of feeling and taste, and in this the trio of players cannot be faulted. There are differences, of course, with recent recordings of these recordings on modern instruments, but there also are differences between any two modern performances. In any case, this concern can be overdone. Mühlfeld heard British clarinetist Charles Draper play the Brahms clarinet quintet in the early 20th century and told him that the flexibility of his performance had revealed subtleties in the work Mühlfeld himself had not observed.

What I hear in all three works is playing of grace and piquancy, informed, we may be assured, by the lessons imparted by having one’s fingers connected to instruments of the time. As Ross writes, “They allow me to create colors and shape notes in the way I imagine necessary for this music.”

And in this recording, we listeners can all enjoy the results.