Throughout the pandemic, artists have been challenged to find new inspiration and new ways of building community. For Montréal-based dancer-choreographer Marie-Nathalie Lacoursière, the last two years have been filled with research, home recording, Zoom classes, and video editing. During the initial pandemic lockdown, Lacoursière, along with friend and colleague Stéphanie Brochard, took to the streets of Montréal to produce Chaconne de Montréal, with choreography set to Henry Purcell’s Chaconne from The Fairy Queen.

As lockdown restrictions eased, Lacoursière and Brochard turned their sites to a massive, interdisciplinary, self-produced, collaborative project. The rewarding product of their work is an instructional platform for Baroque dance, which launches in December 2021. The platform is housed on the website of Les Jardins Chorégraphiques, Montréal’s premiere historical dance company, which Lacoursière founded in 2008 and which she and Brochard co-direct.

“I’ve been thinking of doing something like videos before the pandemic, but I didn’t know what form it would take,” Lacoursière told me in her charming Verdun condo and dance studio. “When the pandemic happened, we just started making videos. I used to give workshops for the conservatory in Toronto, but that was no longer possible, so they asked me to give a Zoom class — same with the Baroque festival in Montréal.”

One of the difficult things about teaching dance on Zoom is the inability to see both the movement of the body and the feet. Once she started pre-recording online presentations, Lacoursière expanded from a basic format to one that included image overlay of Baroque dance notation, as well as a separate foot-cam, which ensures students can always see her feet.

For Les Jardins Chorégraphiques’s instructional videos, Lacoursière was inspired by a platform for Charleston Swing Dance. “I said, ‘Well there’s nothing like that for Baroque dance — that could be great, very dynamic, with many video capsule options. Maybe it’s a good idea for people, even those who are taking Baroque dance class, to be able to use a platform to practice at home or review individual steps.’”

So she imagined it and built it. The initial launch of the platform includes nearly 80 videos, with the same content offered in both English and French. There is a series of videos for warm-ups and basic dance steps — like the bourée or courant — intended to prepare platform users for more complex videos that teach full choreography from period sources. The progression of the videos is such that beginners can learn about Baroque dance from the individual basic steps, and more experienced dancers can access choreography instruction.

The first full choreography video is for La Bourée d’Achille, from Recueil de dances, composé’es par M. Pecour (Paris, 1700). At the beginning of the video, the viewer is reminded of the preparatory videos needed to engage with the choreography, followed by working through the manuscript page by page — first reviewing the floor movements through the space and finally the individual steps and arm movements.

The videos also include elements of theatricality and humor that are inherent in Lacoursière’s work. “I tried to add fun components,” she said. “For example, the chassé step has three forms which I teach, but chassé in French means hunting, so for that video I come out dressed in hunting gear, with a bow, and then we hear duck calls.” The videos also include several sets, props, historical costumes, and an amusing video about Rameau’s recommendations for good posture.

Creating a series of 80 videos during a pandemic was no small feat. It would perhaps not have been possible without creativity, ingenuity, and the collaborative scene of early-music professionals in Montréal. While Lacoursière developed the content and scripts, Brochard was behind the camera and editing video, lutenist Esteban La Rotta recorded a musical theme that introduces each video, and, as pandemic restrictions eased, musicians played live during the recording. The platform also features music recorded by Montréal-based baroque violinist Olivier Brault and his period ensemble, Sonate 1704, as well as members of Les Boréades de Montréal. Additional recordings were used with permission from ATMA Classique and Analekta, two Montréal-based record labels. Links to the ensembles and where to buy the recordings are included throughout the platform.

Lacoursière described the now-familiar experience of learning how to record from home as one of many performers who worked throughout the pandemic. Since the cost of renting space for recording and paying a crew of videographers would quickly render a project of this size impossible, self-producing from home became a necessity. 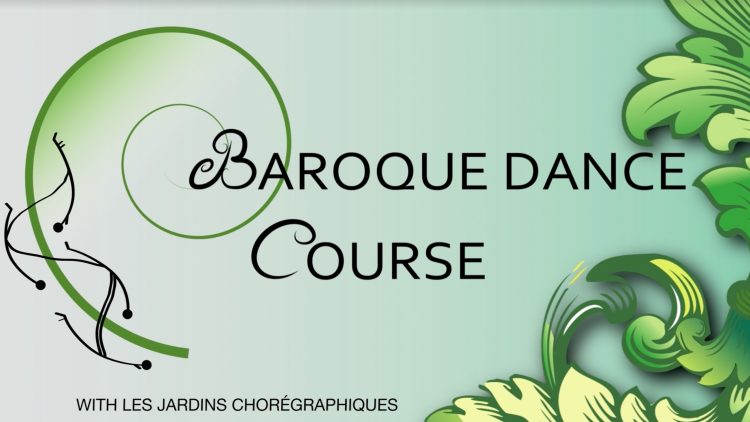 “As we were doing other artistic videos as well,” said Lacoursière, “we would realize, ‘Maybe we should get some professional photography lighting, then maybe we need to have a microphone, and then a teleprompter,’ because at the beginning I had cue cards everywhere.”

The platform stands to serve as an incredibly beneficial resource for dancers, musicians, and historians. Deeply embedded in all of Lacoursière’s work on historical dance is an immense amount of research and dedication to period sources. The instructional materials for her videos are largely extracted from Pierre Rameau’s 1725 dance manual, Le maître à danser, and a 1729 English translation of Rameau’s publication by English dancer and choreographer John Essex.

Training in Baroque dance can be a useful tool for singers to learn about stage movements and basic dance steps that may be beneficial for opera casting, for instrumentalists to build a more complete understanding of style, phrasing, and tempi for dance movements, and for all of us to conceptualize the varied and interdisciplinary nature of performance culture in the early modern period.

I remember my first experience learning about Baroque dance. In response to a slow tempo from the band, one of the dancers said, “Gravity only allows me to stay in the air for so long” — a good reminder of the functional and practical nature of dance movements, and good encouragement to continue seeking new ways to understand the music we perform.

Lacoursière intends to carry on building the platforms and releasing new videos and content every month. As we continue to move out of the pandemic, she hopes to incorporate more live music, historical topic presentations, and interviews with performers and musicians.

“I really love the project,” Lacoursière said. “I’ve been doing this for 25, almost 30 years, and I think it’s a great way to continue what I do. I can continue to teach and to reach more people.”

Paulina Francisco is a soprano and early-modern scholar based in Montréal and is in the final stages of completing a DM in Historical Performance at Indiana University.