For cello players, the six Bach cello suites are a rite of passage, not only a staple of the repertory but also a sort of private shared experience that non-cellists can only look at through a window darkly. As with most auras of mystique, that surrounding the suites is borne largely out of ignorance, for there is much we do not know about these works. Scholars largely believe that they predate the sonatas for solo violin, dated to 1720, and that Bach would have written them in Cöthen while he was in the employ of Prince Leopold. 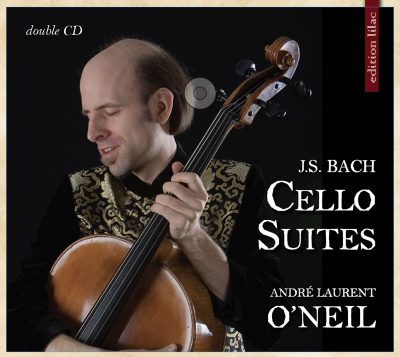 But unlike those other sonatas, there is no surviving manuscript of the cello suites in Bach’s hand. Instead, there are four surviving secondary sources, the earliest two of which are in the hands of Bach’s friend Johann Kellner, an organist, and his second wife, Anna Magdalena Bach, whom some have suggested might even be the actual composer of the works. (The other two date from much later in the eighteenth century.) The four sources vary musically, however, and also leave out any performance markings or interpretive guidelines — a source of frustration for anyone interested in “composer’s intent” as much as it is a boon to everyone wishing to recreate these works in one’s own image.

André Laurent O’Neil’s journey with the suites began when he was still a young boy, taught by his cellist father. The suites continued to surround him as he grew and matured as a musician. But he did not perform all six suites in concert until 2002, not from memory until 2015, at which point he finally felt ready to record them. This recording, the American cellist’s debut solo album, is thus decades in the making. And it is indeed a labor of love: O’Neil’s intimate knowledge of these works is palpable, and he treats them with a kind of familiar, tender reverence that causes the listener to feel almost as if they have been an accidental witness to a very private moment.

For the most part, he adheres to the Anna Magdalena Bach version, though he freely admits in his self-authored liner notes what adjustments he felt were necessary: adding ornaments, varying tempi, and even adding some interesting chromaticisms in the Prelude to the fifth suite. His main goal, O’Neil says, was never to have the same material in the repeats as was in the opening statements. In that and more, he was certainly successful; I laud his decision to value expressivity, energy, and individuality over a strict reading, and moreover, his playing is both sensitive and engaging.

The acoustics of his recording space, and the cellist’s deliberate pacing, allow the whole register to resonate clearly. At the end, I’m left very much with the feeling that, unlike other artists who might wish to show themselves off, O’Neil wishes to show off the suites themselves, and he succeeds. A lovely and welcome addition to the catalogue.