Several years ago, Ensemble Peregrina embarked on a musical journey. Already well known for their excellent scholarship underpinning their explorations of unfamiliar repertory, the acclaimed Basel-based ensemble set off anew around and across the Baltic Sea — home turf to a number of the ensemble’s members — to immerse themselves in the medieval musical traditions of these northern territories. With the recent release of their latest album, their journey has come to a stunning conclusion. 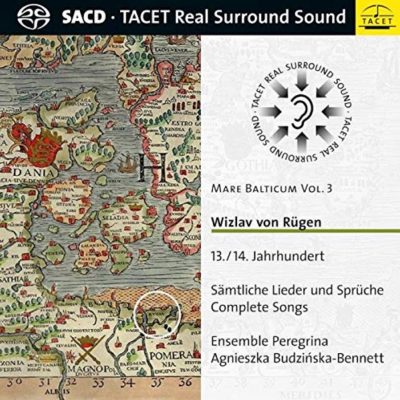 Entitled Mare Balticum, this four-part series of recordings digs into the popular, vernacular, and religious music local to these medieval Baltic regions. But no superficial tour, this; while wide-ranging in scope, it also sinks deeply into these traditions, exploring their individual roots and their connections to the cultures and histories of the broader region. The listener thus hears well-known texts set to different music, liturgical offices for local saints, newly composed plainchant for local churches and convents, even the entire complete works by a local composer, alongside selections of the more well-known Piae cantiones.

The series begins in medieval Denmark with a bang — or, perhaps more appropriately, with a knife, seeing as how the album is centered around two murders. The circumstances of the death of King Erik Klipping (d.1286) are not well understood, although Meister Rumelant von Sachsen (fl. late 13th century) documented some of the events in songs recorded here. Knud Lavard was martyred in 1131 and later canonized as a saint; he is remembered here through selections from his 13th-century liturgical office. All of these works are bookended by some of the earliest known polyphonic works from Denmark and a handful of instrumental works.

While the liturgical works are sung by the gorgeously soaring female voices of the ensemble, they are joined here by Benjamin Bagby (of Sequentia fame), who tackles the stories of crime and murder as well as a lengthy song about sailing across the stormy Baltic by Michel Beheim (1420-1472/79). The intonation of the myriad octaves, unisons, and other perfect intervals throughout works such as “Gaude mater letare” or “Maria candens lilium” is exquisite, as is the beautiful uniformity of vowels and phrasing. The teaming of Bagby and Peregrina is spectacular, the combination of his unmistakably commanding, narratorial voice set against the reverberant medieval harp and soaring ensemble voices, as in the opening track “Mith hierthae brendher,” simply breathtaking.

From Denmark, the ensemble travels to medieval Finland and Sweden. Similar to the first album, they group the tracks thematically, alternating not just between country but also between important personages. Works from the Åbo Gradual and the late 16th-century Piae cantiones frame the entire album, but a group of three works from the same sources form the center of the recording in honor of Henry, an English bishop who converted Finland in the 12th century. These works, by the way, are the earliest extant written musical works in Finnish, and lest the drama of the first album be missed, Henry too was martyred.

The other two thematic units honor St. Birgitta of Sweden as well as Sts. Elin and Eskil. In comparison to Volume 1 of the series, this album more heavily focuses on plainchant, but its organization savvily provides contrast; the ensemble intersperses responsories among single-voice works, alternates singers, and places the polyphonic works, instrumental pieces, or works with instrumental accompaniment at the beginning and end of the album or, as in the case of the album’s longest work, “Ramus virens olivarum,” smack at the center. Not only is the plainchant expressively sung, but it also is of intellectual and historical interest, since, according to the liner notes, the Birgittine liturgy is the only liturgical chant repertory to have been compiled for female-only use. The moralizing song “Olla mortis patescit” is a particular standout not only for its flowering into beautiful harmonies but also for its sardonic views on lapsing standards in school and church.

Volume 3 is the most narrowly focused of the series, containing the complete songs of composer Wizlav von Rügen (fl. 13th-14th centuries). Wizlav is not exactly a household name — in fact, his very identity is not entirely secure, but he was likely Prince Vitslav III (c.1265-1328). Fourteen songs and 13 poems are preserved in the Jenaer Liederhandschrift, and although the pages that would have contained the author’s name are missing, three songs refer to a Wizlav as the author-composer. Most of these works are love songs, but several are exhortations to morality, odes to nature, and paeans to Mary — the typical topics for a Minnesinger of his day.

Here, the male voices of the ensemble (Marc Lewon, Mathias Spoerry) are foregrounded, with a few vocal tracks sung by ensemble director Agnieszka Budzińska-Bennett. The slightly reverberant acoustic and sparse but sensitive instrumental accompaniments combine with Wizlav’s strikingly visual poetry to transport the listener through the looking glass into an intimate, almost nostalgic space. The repetitions built into tracks like “Dem kuninghe Nabughodonosor/Daz guldin hoybet” create an almost meditative atmosphere, and the haunting transverse flute accompaniment on “Uvol dan her meyie” is mesmerizing.

The last volume in the series sees the ensemble back in familiar territory, not only since it focuses on the music of northern Germany and Budzińska-Bennett’s native Poland; Wizlav makes a return in the form of three instrumental works — “Ich will singhen” in particular is beautifully played on flute — and two laments by Meister Rumelant are also included. The ensemble again groups their works thematically, alternating groups of works dedicated to Mary with those to various Pomeranian rulers. One section contains works from the liturgy for Otto of Bamberg, the bishop who converted the region to Christianity; its Alleluia “Filii Syon” is a piercingly beautiful pronouncement. While the cult of Mary was everywhere popular at the time, in maritime areas such as the Baltic, Mary as Stella Maris was particularly important, and so the album begins with that theme; the opening cantio, “Ave maris stella,” is gorgeous, its octave leaps and singable melody set sweetly against the vielle drones. Once more we hear the ensemble’s excellent tuning and uniformity, especially in works such as “Procedentem sponsum,” and the four-part motet “Exordium … Verbum Caro” is a real standout in texture and voicing.

Stylistically, much of what is presented in this series is not unfamiliar to anyone who listens to music of this era. But by and large, music of the Baltic regions gets little attention, unlike the treasure troves of books, articles, and recordings of contemporaneous French, Italian, German, and English music. Most of the music on these albums has never before been recorded. In fact, a significant amount of this music has not even been transcribed, edited, or published; Budzińska-Bennett and Lewon have done much of this legwork themselves, locating manuscripts, choosing repertory, and arranging or even completing some of the works. For their contributions to music history alone, these albums are invaluable.

But their musicality is absolutely top-notch, from the clarity of the text to the beautiful shape of the melodic lines, the quality and sensitivity of the instrumental accompaniments and solo works, the suppleness, control, blend, and tuning throughout—they are utterly convincing. Each individual album is an entire education unto itself, the series a revelation. While the Mare Balticum series as planned has come to an end, surely there must be yet more material from these regions that awaits recovery.