Virtuoso cellist Antonio Vandini’s surviving works fit on one disc. It’s a slim but valuable part of the instrument’s history. He was born and taught in Bologna, a city renowned for its cello tradition. His first regular position was at Venice’s Ospedale della Pietà. Vandini worked with and likely played pieces by his Ospedale colleague Vivaldi while touring northern Italy to acclaim. Yet Padua became Vandini’s home and professional base for 50 years. As the principal soloist for its Basilica del Santo, he met the influential violinist and composer Giuseppe Tartini. The two would remain lifelong friends and collaborators as they both built a name throughout the country. Along the way, Vandini left behind a concise but engaging catalog. 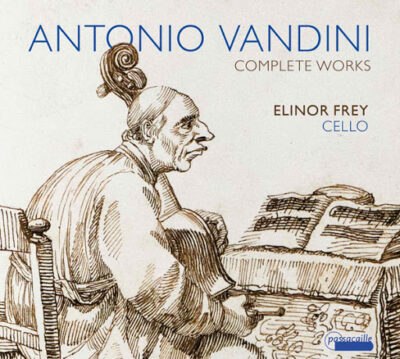 Vandini’s mere seven compositions come from throughout his life and have not been precisely dated. According to contemporaneous music historian Charles Burney, the cellist was renowned for playing “a parlare, that is, in such a manner as to make his instrument speak.” This rhetorical gift is apparent in the themes and singable virtuosity of Vandini’s six sonatas. These short, three-movement works are in slow-fast-fast format, often with the first movement being the longest. Vandini’s single concerto — in the familiar three-movement, fast-slow-fast ritornello form — gives the orchestra a spare role to focus on the cello. Vandini’s music exemplifies the tuneful, consonant, and light-textured Galant style of the pre-Classical period. There are plenty of impressive displays with high notes, double stops, and fast runs, but even those flights stay lyrical and elegant.

American-Canadian cellist Elinor Frey is utterly sensitive to such nuances. Solid chops let her attention to detail sound natural. Her precise touch makes the sudden breaks, rapid ascents, and chordal punches in the E major sonata’s middle movement a lot of fun. In the concerto’s joyous triple-meter dance finale, she throws down some spine-tingling finger work. She also shapes each note so even the briefest divisions have energy and meaning. The C major sonata’s central movement (cataloged in this release as Van. 2) centers on a hurried theme built in rapid, short intervals. Yet Frey still phrases like a vocalist, so the melodic curves and all that filigree shine and flow. The E major sonata’s opening Grave is ideal for savoring her laser-focused tone packed with depth and color.

For Frey’s continuo, gamba player Patxi Montero and cellist doubling violone Marc Vanscheeuwijick take turns partnering with harpsichordist Federica Bianchi. The revolving continuo offers some unique textures but otherwise remains solid accompaniment. When the keyboard drops out in the closing Minuet of the B flat sonata (Van. 3), cello and gamba twist around each other in unnerving suspensions. Bianchi livens things up with imitative fills behind the cello’s sequences in the closing Allegro of the sonata in C (Van. 2) and carousing rhythms and runs in the B flat sonata’s finale (Van. 6). The one-per-part string orchestra in the concerto is spare but still warm and springy behind Frey.

Vandini’s sonatas pop up on cello recital discs, but Frey’s disc is now the third complete set of the sonatas and the second disc to include the concerto. Antonio Mostacci’s 2016 Tactus disc of the sonatas on a five-string piccolo cello is more extroverted — sometimes to a near-Romantic degree — with big effects and a cavernous sound that sometimes resembles a double bass. On his Dynamic recording with L’arte dell Arco last year, Francesco Galligioni phrases more metrically and comes across as emotionally cooler. The harpsichord and bassoon create interesting colors but occasionally swamp the mix. Galligioni also holds his bow underhand like Vandini did well past it becoming outmoded. Frey uses that grip for the Van. 3 and 4 sonatas and the concerto.

Andrew J. Sammut has written about classical music and jazz for All About Jazz, The Boston Musical Intelligencer, Early Music America, The IAJRC Journal, and his blog. He also works as a freelance copyeditor and writer. He lives in Cambridge, MA, with his wife and his dog.