The Beethoven Sequence is the latest thriller by Gerald Elias, author of the award-winning mystery series featuring the distinguished violinist and brilliant detective Daniel Jacobus. His new book has a different hero/protagonist — and it might be his best yet.

The plot is complicated, with lots of twists and turns, and a host of colorful characters, all portrayed with Elias’s unique sense of humor and insightful musical knowledge as a professional violinist. The story features one Layton Stolz, a welder turned orchestra conductor whose life is changed after hearing Beethoven’s Egmont Overture on the radio. He becomes obsessed with Beethoven, decides that the composer’s ideals of liberty, freedom, and brotherhood will be his own, and sets out to realize them. 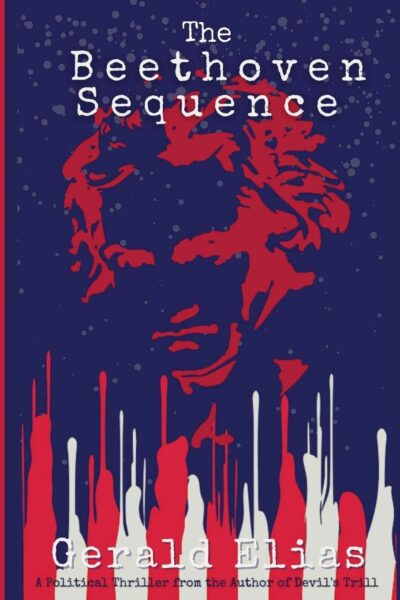 We trace Stolz’s path from being rejected by Juilliard into its conducting program; creating an orchestra in his local high school (where he eventually initiates a five-year “Beethoven Sequence” into the curriculum that begins with the Egmont Overture, to be followed by the Eroica, the Fifth Symphony, the four Leonore Overtures, and finally a performance of the Ninth Symphony); crossing swords with the school board and even the Under Secretary of the U.S. Department of Education; to becoming a world-famous celebrity. Nevertheless, Stolz’s increasingly paranoid mental state, heightened by countless childhood traumas inflicted on him by his parents and exacerbated by a former student who steals and tries to put his own stamp on the Beethoven Sequence, leads to an unpredictable and disastrous conclusion that involves blackmail, imprisonment, suicide, and murder.

Elias’s writing style is fluent, colorful, and fun to read. To cite just one example, the author tell us that when Stolz tries to conduct his orchestra for the first time and lowers his arms to begin “just like he had done countless times in front of the mirror, precisely timed to the record,” it was a disaster; the string players entered “as raggedly as a wind-shredded flag,” and the woodwinds seemed “incapable of coaxing anything other than random, avian squawks from their instruments.”

Unbelievably (it is a novel, after all), the school board is so impressed that it allows Stolz to initiate his “Beethoven Sequence.” This concludes with a performance of the Ninth Symphony that overpowers a board meeting that was being led at the same time in an adjoining building by his rival, Phillip Valentine, whose curriculum guidelines would compel schools to teach sex education, ESL, and Black History. Elias describes the scene: “With all the windows open, Valentine’s words can’t clearly be heard above the music.” Worse yet, “though no one there understands German, they have learned from Layton Stolz it has something to do with brotherhood, freedom, and/or liberty. Maybe even God.” Therefore, “one by one they stand up and they sing along with the chorus next door [but] not knowing a word of German, let alone the text, they substitute “La-la la-la la-la-la-la” for “freude schöner Götterfunken.” At the conclusion of this chaotic scene, a small group sitting in the back of the town hall bursts out into a chant of “USA! USA!”

Readers will be treated to more of such painful but hilarious incidents in this book, as well as a hidden message. Did I mention that Stolz turns into a musical dictator, appears as a guest on Diane Sawyer’s “Good Morning America,” and ultimately mounts a successful run for President of the United States? Of course, many despots have used great music to promote their political agendas, the most famous being Adolf Hitler. But The Beethoven Sequence is a bizarre reflection on the current state of affairs in our own nation. The question is: How could this mentally unstable conductor of Beethoven’s “greatest hits” become dictator of the United States of America — the most revered democracy in the world? I cannot give away the ending, but like so many of Elias’s mystery novels, The Beethoven Sequence is a page-turner that is impossible to put down.

Carol Lieberman is featured in the current issue of Music at Yale “Celebrating The Legacy of Women at the Yale School of Music,” as one of the twelve women who played an important role at the school during the past 50 years. A recent review of her 2-CD set, The Art of Carol Lieberman, hailed her “as a violinist’s violinist…both as soloist and a chamber musician.”