BOOK REVIEW — Beyond Boundaries is a collection of 15 essays that seek to re-examine 19th- and 20th-century attitudes towards early modern English music making (ca. 1550-1800). The editors explain in the introduction that the artificial social and purpose-driven boundaries created in earlier scholarship are not sufficient to describe the music making of the period, which “fluidly moved between social and professional hierarchies, oral/aural and written traditions, and sacred and secular contexts.” These richly resourced essays, organized in chronological order, convincingly re-evaluate the use of architectural space and the distinctions between nationalities, gender, professional status, and class distinctions to arrive at a deeper understanding of the musical practices of this era. 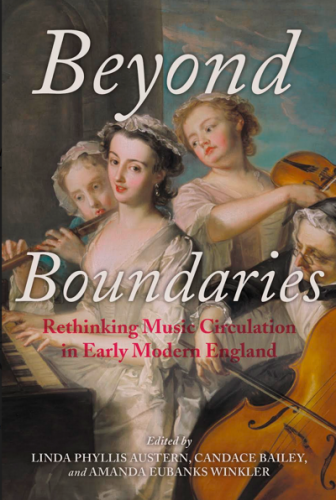 Chapters 1, “Tudor Musical Theater: Sounds of Religious Change in Ralph Roister Doister” (Katherine Steele Brokaw), and 2, “English Jesuit Missionaries, Music Education, and the Music Participation of Women in Devotional Life in Recusant Households from ca. 1580 to ca. 1630” (Jane Flynn), describe how musicians negotiated the political dangers inherent in the antagonistic relationships between the ever-changing Protestant and Catholic governments of the 16th century. Brokaw, for example, demonstrates how the composer Nicholas Udall was able to utilize what she calls “shape-shifting to successfully negotiate the social and religious anxieties of the court of Mary Tudor,” while Flynn provides an interesting account of the clandestine accommodations made to liturgical practice by Catholics during the reigns of Protestant monarchs.

Chapters 3, “The Transmission of Lute Music and the Culture of Aurality in Early Modern England” (Graham Freeman), and 4, “Thomas Campion’s ‘Superfluous Blossomes of His Deeper Studies’: The Public Realm of His English Ayres” (Christopher R. Wilson), discuss the popularity and dissemination of solo lute music and songs with lute accompaniment, detailing the performance environment, including choice of location, which sometimes created incentives for publication and sometimes did not.

Moving forward to the post-Restoration period, Chapter 8, “The Challenge of Domesticity in Men’s Manuscripts in Restoration England” (Candice Bailey), regards gender and musical purpose in the evaluation of keyboard music. Chapters 9, “A Midcentury Musical Friendship: Silas Taylor and Matthew Locke” (Alan Howard); 10, “Music and Merchants in Restoration London” (Bryan White); and 11, “Daniel Henstridge and the Aural Transmission of Music in Restoration England” (Rebecca Herissone), examine the practice of categorizing the professional or amateur status of musicians by social level and question the validity of evaluating compositional worth and purpose by the degree of difficulty in the notated music. Also interesting is the observation that, despite rising literacy rates in England, aural transmission of music remained an important method of distribution well into the 18th century.

The final four chapters bring the reader fully into the 18th century and identify a variety of issues regarding patronage by the upper classes. Chapter 12, “Courtly Connections: Queen Anne, Music, and the Public Stage” (Amanda Eubanks Winkler), discusses the use of music to popularize Queen Anne’s rule, while Chapter 13, “Disseminating and Domesticating Handel in Mid-Eighteenth-Century Britain” (Suzanne Aspden), uses Handel’s career to demonstrate the “intermingling of the public and the private” in 18th-century London’s entertainment.

The final two chapters — “From London’s Opera House to the Salon? The Favourite (and Not So ‘Favourite’) Songs from the King’s Theatre” (Michael Burden) and “Education, Entertainment, Embellishment: Music Publications in the Lady’s Magazine” (Bonny H. Miller) — detail how publicly performed arias and popular songs migrated from the stage to the home, again blurring the distinction between public and private, professional and amateur music making. Burden is especially successful in explaining and visualizing the performance practices of 18th century opera singers.

While the academic style of the prose is occasionally dense and sometimes detracts from an easy understanding of the topics under discussion, this book is valuable in bringing new research and a fresh approach to demonstrate that music making in England during the 16th to 18th centuries was vibrant, varied, often spontaneous, and a shared experience enjoyed by all of its citizens.

Valerie Walden received her Ph.D. from the University of Auckland, is the author of One Hundred Years of Violoncello; A History of Technique and Performance Practice, 1740-1840, a chapter in The Cambridge Companion to the Cello and Reader’s Guide to Music, and 31 entries in the New Grove Dictionary of Music and Musician. She is preparing an edition of the music of the noted 19th-century London cellist Robert Lindley for A-R Editions.