Book Review: Tracing the Adventures of Homer’s ‘Odyssey’ from Page to Stage

Performing Homer: The Voyage of Ulysses from Epic to Opera. Edited by Wendy Heller and Eleonora Stoppino. Routledge, 2020, 222 pages.

Running through Homer’s Odyssey and Iliad is a sense that performance is essential to human expression, defining our very existence, not only because the two epic poems were themselves meant to be performed and heard, but also because of the performative, almost ritual, actions of their protagonists. 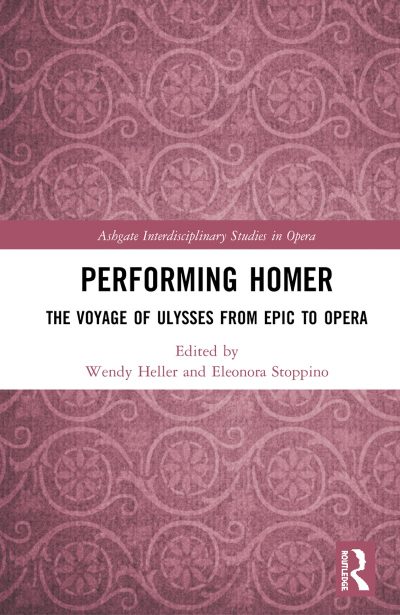 The weight that the performative element plays in these two works was recognized over the centuries by countless artists, who re-imagined Homer’s epics through a plethora of art forms, thus entering in a creative dialogue with them. It is through this dialogue — what is taken and what is left, what is reinterpreted and how it is re-presented — that we can recognize the extent to which epic resonates with audiences across centuries and geographical areas.

This is the first book to invite a number of scholars to reflect on the Western reception of Homer’s epics, particularly his Odyssey, from an interdisciplinary perspective and through the lens of performance. This exploration begins with considerations of the performative elements inherent in Homer’s epics and ends with an epilogue on the resonance of Homer with contemporary artists and audiences. Early modern musical incarnations of the Odyssey, however, take center stage in the volume, and particularly Giacomo Badoaro and Claudio Monteverdi’s Il ritorno d’Ulisse in patria (1640), an opera that is becoming increasingly well-known to musicians, scholars, and audiences. It is quite fitting that the idea of this timely volume took its impetus from the actual staging of a student production of the opera at Princeton University by the Princeton University Opera Theater, with music direction by Michael Pratt and stage direction by Andrew Eggert.

Il ritorno d’Ulisse in patria is one of Monteverdi’s late operas, and, unsurprisingly for someone who experimented until the end of his life, it is the first opera based on epic and the first to tackle the challenges of placing Homer’s Odyssey on the musical stage. As the opera premiered in Venice, the composer and librettist exploited the conventions of Venetian opera of the time, including its spectacular dances, machines, and special effects. These elements are some of the most challenging for a director to capture and recreate for the stage, as Eggert discusses in this volume. Balli, or dances, in particular were an integral part of both spectacle and drama, a visual element of the operatic production that was also an outlet for passions and anxieties that could not be properly articulated through singing and words, as Wendy Heller has argued. Even though the music for the balli of Il ritorno is lost, Micaela Baranello offers, through a close reading of extant sources and contextual evidence, a thoroughly convincing interpretation of a “dance of the Moors,” which eight dancers would have enacted on music possibly by Monteverdi himself.

Anyone familiar with the final books of the Odyssey, recounting Ulysses’ return to his home, will recognize some key moments in Badoaro’s libretto. And yet, as Ellen Rosand points out, it is by looking at the differences between the Odyssey and Il ritorno that one can see how the Venetian aesthetic played into the refashioning and reception of the opera. Rosand, whose work on Venetian opera has been fundamental for the rediscovery of the genre, reveals how discourses on women’s virtue and chastity, which in Venice were at the forefront of the intellectual interests of the Accademia degli Incogniti, affected the portrayal of the characters of Ulisse and Penelope. While Badoaro played his part in shifting the characterization of Penelope away from the perceptive and assured agent portrayed by Homer and towards an epitome of resilience and chastity, it is ultimately Monteverdi’s music and his setting of the libretto that holds Penelope away from indulging in “the sensuality, the luxury, and the release of song,” confining her to recitative for most of the opera, thus reinforcing her inability to ultimately liberate herself until Ulysses’ return.

Hendrick Schulze traces the early reception of Il ritorno within the context of the Incogniti’s ideals, arguing that it was intertwined with the debate between two conceptions exemplified in the opera: on one hand, Badoaro’s libretto’s reading of the Odyssey as an epic of a more universal and almost abstract character, and on the other, Monteverdi’s conception of Ulysses’ journey as that of a human, more relatable drama.

The reception of the Odyssey in Italian opera after Monteverdi reveals further changes of focus from one character to another according to socio-political and aesthetic contexts. Robert Ketterer shifts our attention to the 18th century and Ulysses and Penelope’s son Telemachus. Ketterer vividly portrays the French intellectual context in which Salignac de La Mothe Fénelon’s Télémaque (1699), an influential French libretto meant as an education tool for the son of the French Dauphin, sparked lively debates for its emphasis on moral and rectitude in France but failed to impress the Roman audience when it was adapted by Carlo Sigismondo Capeci and Alessandro Scarlatti for the operatic stage in 1718. On the contrary, the French cantata proved a fertile terrain for the reception of Fénelon. Michele Cabrini offers a close and insightful analysis of cantatas by Charles-Hubert Gervais, Jean-Baptiste Morin, and Élisabeth Jacquet de la Guerre based on Fénelon’s reading of the Odyssey, arguing that the French cantata was the ideal genre for experimentations that captured some key narrative elements of Homer’s epic.

Performing Homer offers a new and original interdisciplinary context within which to read the journey of Ulysses from epic to opera and, in particular, to appreciate one of Monteverdi’s fundamental contributions to the genre in a revealing new light. Each chapter contributes fresh insights into the reception of Homer’s epics, and the entire book stands out as a strong reminder of the numerous ways in which the journeys of their protagonists are so profoundly intertwined with many of our own.

Valeria De Lucca is Associate Professor of Music at the University of Southampton. She is the author of studies on 17th-century Italian opera and patronage.